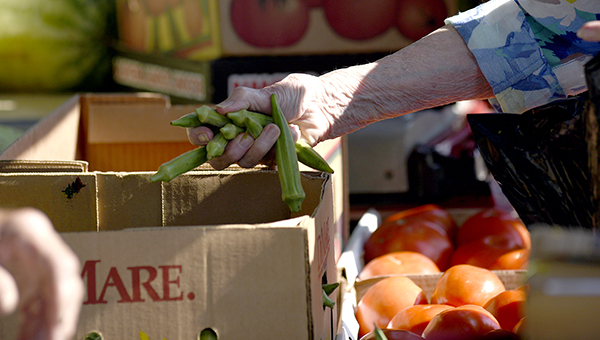 Customers pick through the produce that was available at the Vicksburg Farmers' Market.

The Vicksburg Farmers’ Market has been a popular downtown event, as vendors with a variety of wares from fresh produce to canned goods to seafood and poultry set up shop at Washington Street Park.

This year’s summer market kicked off May 7, and Farmers’ Market manager Rebecca Sigh said shoppers took advantage of the many items that were offered.

The event is scheduled to run through the summer months on Saturday mornings at 1001 Washington St.

In addition to shopping with the vendors, Sigh said, an educational component has been added for this year’s marketgoers.

“We wanted to incorporate a more educational aspect of it to help people understand more of what the farmers do and that it is more than just growing a garden and to just branch out more,” Sigh said.

On Saturday, May 14, Sigh said, in anticipation of World Bee Day, the theme for the Farmers’ Market will be honeybees and their importance to farmers. World Bee Day is May 20.

“We just wanted to celebrate it early and really wanted to emphasize how important the bees are to the ecosystem,” she said. “Bees pollinate 80 percent of food that is grown.”

Sigh said many of the vendors will incorporate the bee theme by selling baked goods. Local beekeeper Crorey Lawton will be on hand in “full bee gear” to talk about bees. Other activities will teach children about bees and how they function.

“We are also going to try to have some different activities each time,” Sigh said. “This week we will offer STEM activities for the kids and a sensory box for the younger kids.”

Sigh said she was looking forward to this summer’s Farmers’ Market.

“I am anticipating a good production year for our farmers and that has been the feedback I have gotten from them,” she said. “For the past two years, the weather has affected the growing season. Last year we had the ice storm and the year before we had a late cold front come in. We haven’t had any of that this year.”

While it is still early in the growing season — June is typically peak season, Sigh said — she was pleased with the first weekend.

“We had 16 vendors and are anticipating that number to grow each week. I have some produce vendors that have said they don’t have enough to come yet, but the closer to June the better it gets,” she said.

Live music will be performed each week during the Farmer’s Market and a local restaurant participated last week.

“The Squeeze Juice Bar came and made popsicles from fruit with no added sugar,” Sigh said.

The Vicksburg Farmers’ Market runs from 8 a.m. until noon each Saturday through June, and from 8 until 11 a.m. in July.

“Come early,” Sigh said. “That’s the best time to come to get the best selection.”

Vendors will talk about the canning process.

“Our canning vendors will be showing how to get started canning and giving tips and tricks to the canning world,” Sigh said. People with old canning jars are also encouraged to drop them off at the market to be recycled.

“We will also have a building station at the market provided with wheels, pipe cleaners, wires and other supplies needed to get your zucchini ready,” she said.

All artists are invited to come and create chalk artwork throughout the park sidewalks.

“We will have chalk available, but we also ask that you bring your own,” Sigh said.