Flashes work around injuries to add depth ahead of spring game 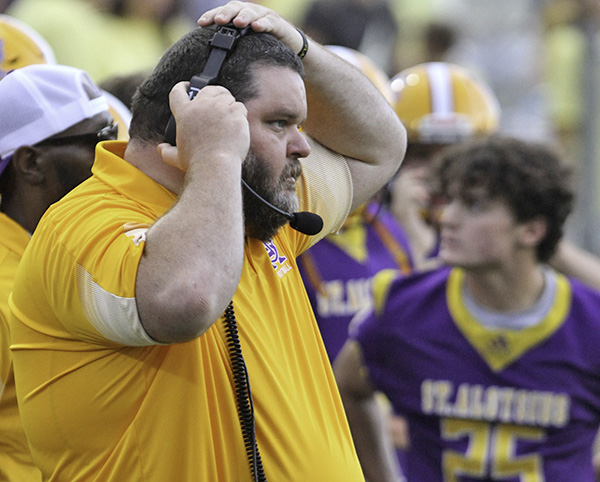 St. Aloysius football head coach Bubba Nettles looks at his team during a game last season. The Flashes will go on the road Friday to play Central Hinds in their spring game, beginning at 4 p.m. (Paul Ingram/For The Vicksburg Post)

As they prepare to play a game on Friday the 13th, St. Aloysius’ football players have been suffering injuries that would seem right at home in the famous horror movie of the same name.

One sliced his hand open on a sharp can top. Another was hurt in what head coach Bubba Nettles described as “an unfortunate chainsaw accident” that thankfully was just a cut on the leg and not a full-on mutilation.

None of the injuries are considered serious enough to sideline those players for the entire offseason. They will, however, test the Flashes’ depth and provide opportunities for younger players to gain experience when they play Central Hinds in the spring game Friday.

“It’s been an odd spring with injuries that have been non-football related. It’s been crazy,” Nettles said. “But at the same time, we’ve got some current eighth-graders that will be ninth-graders with Pierson Smith, Robert Lee and Sadler Lambiotte that are stepping their game up. They will play Friday nights for us and they will play this Friday.

“We’ve been able to develop some young depth at those positions,” Nettles added. “I hate that the injuries have happened, but if you’re not able to prepare for that then that’s your own fault.”

St. Al and Central Hinds will play a junior varsity and varsity scrimmage beginning at 4 p.m. Friday at Central Hinds. The junior varsity will have two series of eight plays each, followed by one quarter with a running clock. The varsity will then take the field and have a 10-play series for each team followed by two quarters with a running clock.

Other than the bizarre injuries, Nettles was enthusiastic about the Flashes’ progress in his second spring as head coach. With a full offseason program to work with — Nettles was an assistant with St. Al in 2020 but did not become head coach until March 2021 — he’s been able to tweak a few things and better evaluate all of his talent and schemes.

Among the adjustments, he said, has been a refined offense.

“It’s gone great. We’ve added a few new formations, a few new twists and turns. We’ve become a little more RPO-ish with our running plays,” Nettles said. “Getting those down and having the quarterbacks read their keys to determine whether to give it, run it or pass it, we have really stressed that for the past two weeks and it’s starting now to finally click.”

St. Al will need to replace two-year starting quarterback Tristan Wilbanks. John David Liggett and Carson Smith are competing to fill the void, and Nettles said both have done well during the month-long spring practice period.

The bigger weapon, though, will be the running game. Running backs Padre Gray, Thompson Fortenberry and Damien Reeves combined for nearly 1,500 yards last season and all three are returning. Along with linemen Jax Oglesby and Mason Watts, there is enough experience to form a powerful core for the offense.

“We have a two-headed monster at running back with Padre Gray and Thompson Fortenberry, who’s a 215-pound bruiser. With Jax Oglesby back and Mason Watts, our offensive line is pretty stout,” Nettles said. “So offensively, we should be pretty good. It’s been fun to watch the competition at those spots.”