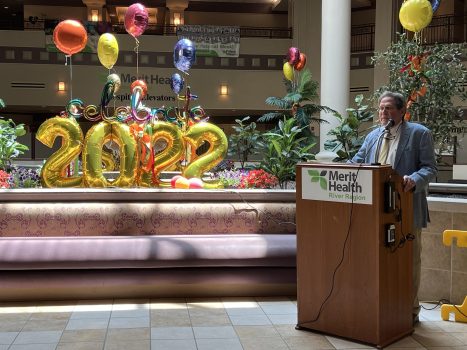 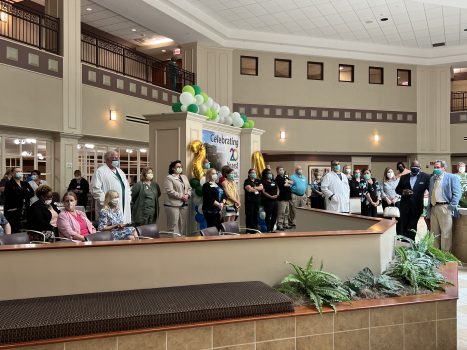 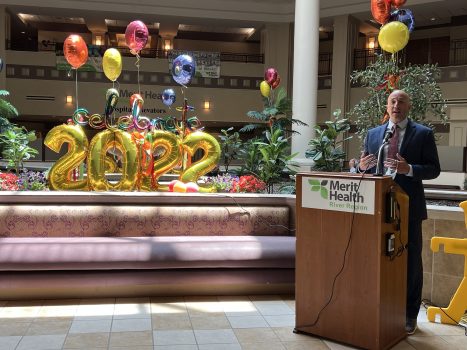 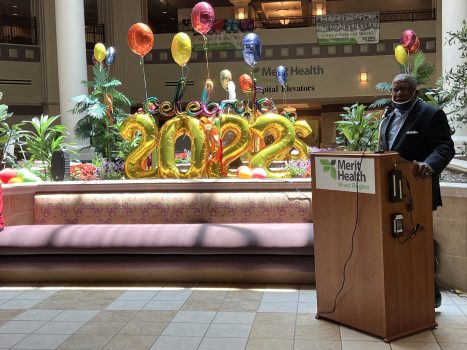 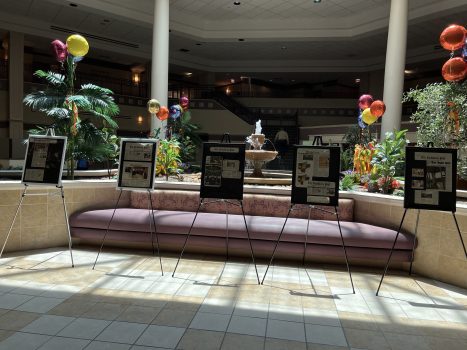 In addition to cupcakes, balloons and other traditional party decor, Merit Health River Region also displayed articles from The Vicksburg Post printed over the course of the hospital's 20 years serving the area. (Photo by Anna Guizerix)

Merit Health River Region has served Warren County and the surrounding area for 20 years as Vicksburg’s only hospital.

On Wednesday, hospital staff, community leaders and elected officials gathered in the hospital’s lobby for a special celebration to commemorate the milestone.

“This is truly a community hospital,” said Barry Moss, Interim CEO at Merit Health River Region and Vice President of Operations for Merit Health. “While we’re celebrating 20 years today… This celebration is not only celebrating the past; it’s also us getting together and talking about where we’ll be 20 years from now.”

The hospitals also lacked the state-of-the-art equipment that it took to recruit specialists, which in turn caused an issue for patients, and the doctors found themselves losing patients.

Fagan, Hopson and Pierce together formed a physician-led effort to improve medical care in Vicksburg. Reflecting on the many changes since Merit Health River Region opened its doors in February 2002, Fagan said he felt proud of their work as a lasting legacy for the community.

“Our goal was to have a new hospital, and to improve services and service lines, to have a new cardiac unit and CVICU, and to have cardiac surgeries here in Vicksburg,” Fagan said. “We look to the past, but we’re also looking to the future. We’re still trying to improve.

“I always ask myself, ‘What would healthcare look like in Vicksburg, if we hadn’t done this?'” he added. “I’m just happy to be a part of it.”

She described being at the hospital her husband helped shape as “emotional,” noting much of what patients entering the hospital see today found its origins in her family’s Indiana Avenue home.

“I look around, and most of the pictures hanging in this hospital, the paint samples, everything, were in my dining room first,” Hopson said. “There, all the decisions were made. … It’s emotional, because my husband was so involved with building the hospital.

“But I’m delighted that his dream has materialized to what it is today,” she added. “His dream was that we would have one hospital, a stronger hospital. When I look up and see the surgery center with his name on it, that makes it all worth it.”

The community-led effort to make Merit Health River Region what it is today was commended by Vicksburg Mayor George Flaggs Jr., who along with Moss and Fagan addressed attendees at the event.

Flaggs credited the staff at Merit Health River Region with keeping himself and his family healthy, specifically the hospital’s cardiology staff.

“Some of the doctors at this hospital saved my life. To this day, I have not gone outside of the community of Vicksburg to get any health care,” Flaggs said. “You have provided for us and given us your best. You have a brand that I understand very well, a brand that can provide the best service.

“It’s hard for me to be standing here and not mention a great friend of mine, Dr. Hopson. I can’t walk through those doors without being reminded of the kind of leadership he had,” Flaggs said.

The hospital will continue celebrating its 20th anniversary throughout the year, and is currently in the midst of honoring employees as part of National Hospital Week.