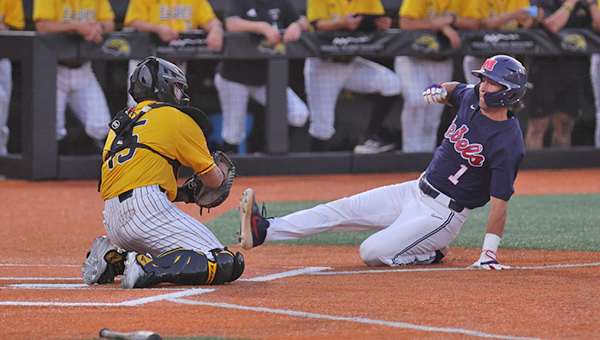 HATTIESBURG — As far as midweek college baseball games go, they don’t get much more important than Ole Miss vs. Southern Miss on Wednesday night.

Both teams were in desperate need of a quality late-season win to bolster their sagging NCAA Tournament outlook. Only one could get it — and the one wound up being Ole Miss.

Kevin Graham and Kemp Alderman hit back-to-back home runs in the fourth inning, and four pitchers combined to allow one run and five hits as the Rebels beat their in-state rival 4-1 at Pete Taylor Park.

Drew McDaniel (5-2) allowed one run on four hits, and struck out eight batters to get the win. Relievers Jackson Kimbrell, Josh Mallitz and Brandon Johnson followed with four scoreless innings, and combined for another seven strikeouts. The Rebels’ bullpen allowed one hit and one walk.

Johnson pitched a scoreless ninth inning and earned his seventh save of the season.

A crowd of 6,346 — the largest in the history of Pete Taylor Park — watched the game.

Christopher Sargent hit a solo home run in the second inning for Southern Miss, but the Golden Eagles struggled at the plate for most of the night. They had two runners on with one out in the bottom of the ninth inning and did not score.

Southern Miss (36-13, 18-6 Conference USA) was ranked No. 4 in the country and riding a 15-game winning streak in late April that pushed it into the discussion for a potential top-8 national seed. Since then it has lost two consecutive Conference USA series and five of its last eight games overall.

The slump has not only dropped the Golden Eagles to No. 26 in the NCAA’s latest RPI rankings — the primary formula used to select NCAA Tournament teams and seeds — it has put them in danger of sliding out of first place in the Conference USA standings.

Southern Miss has a two-game lead over UTSA (32-16, 9-5) going into their pivotal three-game head-to-head series this weekend in Hattiesburg. Southern Miss can clinch the C-USA regular-season championship with a series victory, and needs to win at least one game to stay in first place.

The Rebels lost four consecutive SEC series before sweeping Missouri last weekend. They ran the winning streak to four games with Wednesday’s victory, and the victory over a — for now — team ranked in the RPI top 30 was a big boost to their NCAA Tournament resume.

Ole Miss heads to Baton Rouge this weekend for a three-game series with LSU (33-15, 14-10). The top 14 of 16 teams in the SEC qualify for the conference tournament. Missouri is in last place with a 7-17 SEC record, and five teams — including Ole Miss — are on the bubble with either nine or 10 conference wins, with two league series left on the schedule.