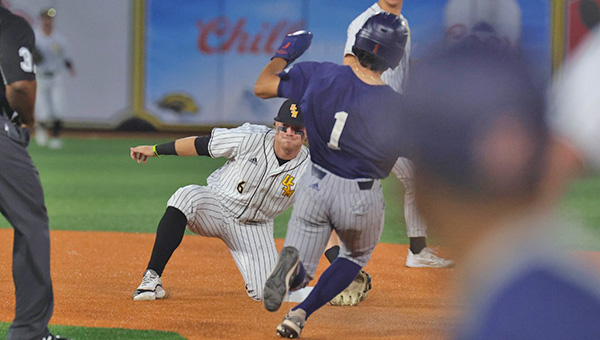 UTSA batted around and scored six runs in the top of the sixth inning, and rode that rally to an 8-7 win over Southern Miss at Pete Taylor Park.

Southern Miss has lost six of its last nine games, as well as its last two C-USA series entering this weekend. It led Friday’s series opener 3-1 after Carson Paetow hit a three-run home run in the fifth inning, but things quickly unraveled in the sixth.

Ryan Flores led off with a single and was the first of 11 UTSA batters to come to the plate in the inning. The Roadrunners stitched together five singles — including run-scoring hits by Sammy Diaz, Austin Ochoa and Flores on his second trip to the plate — to surge ahead 7-3.

Southern Miss scored in the sixth, seventh and eighth innings but never regained the lead or tied the game.

Diaz finished 3-for-4 with two RBIs for UTSA, and Leyton Barry had two hits and two RBIs. Paetow finished with four RBIs for Southern Miss, and also scored two runs.

Texas A&M 8, Mississippi State 7
Troy Claunch hit a bases-clearing double in the bottom of the seventh inning to give Texas A&M the lead, and the Aggies hung on to beat Mississippi State in the opener of a three-game Southeastern Conference series.

R.J. Yeager, Brad Cumbest and Kamren James all homered for Mississippi State, which led 7-4 before Texas A&M (31-16, 15-10 SEC) put together a four-run rally in the bottom of the seventh.

Texas A&M loaded the bases and scored a run off of five walks in a six-batter span. Claunch then hit a two-out double to right center field to clear the bases and put the Aggies ahead 8-7.

Mississippi State loaded the bases with two outs in the ninth inning, but couldn’t get the tying run home.

Mississippi State (25-25, 9-16), the defending national champion, lost its seventh consecutive game. It remained tied with Kentucky for the final spot in the upcoming SEC Tournament.

The Bulldogs and Aggies will play against Saturday at 2 p.m. and Sunday at noon.

Ole Miss 4, LSU 2, suspended
Ole Miss and LSU made it into the third inning Friday night in Baton Rouge before heavy rain forced them to suspend their series opener. Ole Miss led 4-2 when play was halted.

The game will resume Saturday at 11 a.m., with LSU batting with no outs and nobody on in the bottom of the third.
Game two of the series will follow 50 minutes after the conclusion of game one. Both games will be nine-inning contests.

The remainder of game one will stream live on SEC Network+. The TV assignment for game two is yet to be determined. Both games can be heard on radio on 107.7 FM.