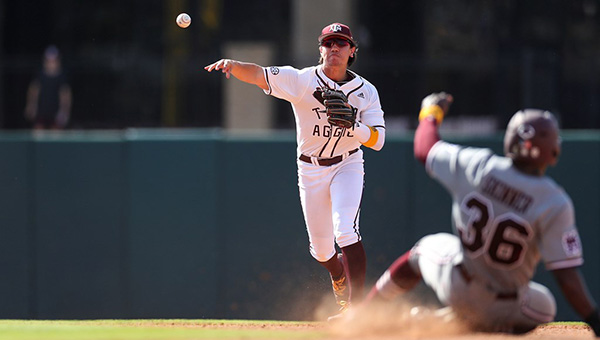 COLLEGE STATION, Texas — Another late-inning meltdown turned into yet another frustrating loss for Mississippi State.

Ryan Targac hit a go-ahead RBI double in the bottom of the eighth inning, and Texas A&M tacked on a pair of insurance runs to beat Mississippi State 9-6 on Saturday.

Texas A&M (32-16, 16-10 Southeastern Conference) has taken the first two games of the three-game series, and will try for the sweep Sunday at noon. The game will be televised on SEC Network.

Mississippi State (25-26, 9-17) lost its eighth game in a row, and is in danger of missing the postseason a year after winning its first national championship. The Bulldogs remained tied with Kentucky for the final spot in the SEC Tournament with four regular-season conference games remaining.

Mississippi State finishes the regular season next weekend at home against No. 1 Tennessee, but first needs to salvage at least one win against Texas A&M.

The Bulldogs gave up four runs in the seventh inning in an 8-7 loss in Friday’s opener, and then three in the eighth inning Saturday.

MSU’s Brad Cumbest hit a solo home run in the top of the eighth to tie the score at 6, and then the Aggies roughed up reliever Pico Kohn in the bottom half.

Kohn walked leadoff hitter Brett Minnich and then gave up a single to Troy Claunch before Targac’s double put the Aggies ahead 7-6. Jordan Thompson then hit a sacrifice fly and Trevor Werner an RBI single to make it 9-6.

Mississippi State got its leadoff man on base in the ninth inning but nothing came of it.

Cumbest’s home run was one of three the Bulldogs hit in the game. Jess Davis hit a two-run shot in the second inning, and Hunter Hines a solo homer in the third to put them ahead 4-0.

Werner was 2-for-4 with a home run, three RBIs and two runs scored for Texas A&M. Jack Moss and Dylan Rock had two RBIs apiece.