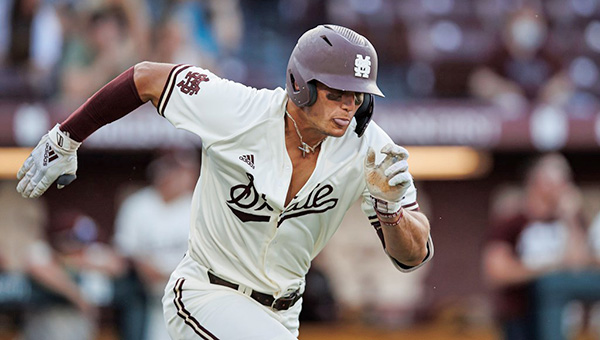 STARKVILLE — Mississippi State finally ended its losing streak. Now all it needs to do to keep its season alive is slay a beast.

Mississippi State piled up 13 hits, including a three-run home run by Brad Cumbest and a three-run double by Lane Forsythe, to beat North Alabama 14-4 on Tuesday.

The victory snapped the Bulldogs’ nine-game losing streak. They’ll face No. 1 Tennessee (46-7, 22-5 Southeastern Conference) in a three-game series beginning Thursday night in Starkville, and need to win at least two of them — and get some help — to qualify for the SEC Tournament.

If Mississippi State and Kentucky wind up tied, the No. 12 seed in the tournament would go to the winner of a coin flip. The teams have not faced each other, and both would have won their series against the top team in the league — Tennessee — at that point.

Tennessee has already clinched the SEC’s regular-season championship and the top seed in the conference tournament. It beat Belmont 18-0 on Tuesday.

Mississippi State needs to take at least two out of three from the Volunteers to reach that point, however, and also have Kentucky lose its series against Auburn to make up the one-game difference in the standings.
Mississippi State does own the head-to-head tiebreaker against Alabama after winning that series in March.

If there is a three-way tie, it will be broken using winning percentage against the top teams in the SEC standings beginning with Tennessee and working downward. MSU would need to sweep Tennessee to create that scenario, however.

Even if the task ahead of the Bulldogs is a tall one, they’ll at least go into it with a bit of positive momentum for the first time in three weeks.

North Alabama (12-38) scored four runs in the top of the first inning on Tuesday, but the Bulldogs answered with seven in the bottom half.

Kellum Clark hit a two-run double and Forsythe followed three batters later with a bases-clearing two-bagger. Mississippi State sent 12 batters to the plate and scored their runs on only three hits. North Alabama starting pitcher Jacob Bradshaw walked five batters in his only inning of work.

Mississippi State batted around again in the sixth inning while scoring five runs. Cumbest’s home run came during that rally, and two runs came across on a single by Luke Hancock.

Cumbest finished 2-for-5 with four RBIs and two runs scored, Kamren James had two hits and scored three runs, and Clark scored three runs and drove in two more. R.J. Yeager went 3-for-3 with a double and three RBIs.

The Bulldogs’ much-maligned bullpen also turned in a strong outing. Starter Cole Cheatham did not make it out of the first inning. Drew Talley, Cam Tullar and Mikey Tepper picked him up by combining for 7 1/3 shutout innings. The relievers allowed five hits and one walk, and struck out eight batters. Talley (1-1) pitched 2 1/3 innings and earned the win.