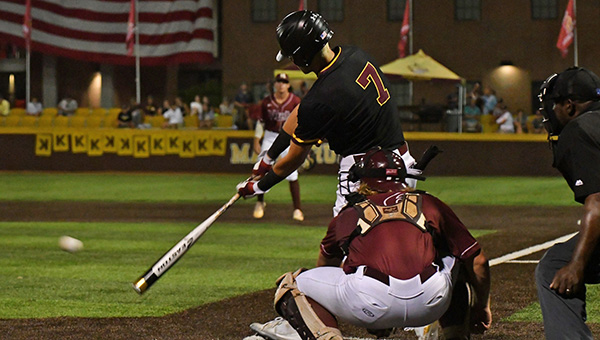 POPLARVILLE — Hinds Community College played deep into the night, but could not live to fight another day.

Preston Soper lined an RBI single to center field in the bottom of the 12th inning, bringing in Matt Mercer from second base with the winning run, as Pearl River Community College defeated Hinds 6-5 in the NJCAA Region 23 tournament on Wednesday.

“I just wanted to keep it simple,” Soper said of his game-winning hit. “I just swung and that’s what happened. I was nervous going into the at-bat because it was a big situation in the game. I got a good pitch to hit and whatever happened, happened.”

Hinds finished its season with a 30-18 record. It went 0-4 against Pearl River, including two losses in the Region 23 tournament. The Eagles beat LSU Eunice in their tournament opener, lost to Pearl River in the next game, and beat East Mississippi 10-4 in an elimination game Wednesday afternoon.

Hinds reached the 30-win mark for the first time since 2017.

Pearl River (39-10), the No. 1-ranked team in the country, won its third consecutive game in the tournament and will play LSU Eunice Thursday at 4 p.m. Pearl River can advance to the NJCAA Division II World Series with one victory, while LSU Eunice needs to beat Pearl River Thursday and then again on Friday.

Wednesday’s game finished around 12:30 a.m. — more than 12 hours after Hinds’ day started with its elimination game against East Mississippi — and provided plenty of late-night drama before Soper’s walk-off hit.

Justin Williams hit two solo home runs to help Hinds overcome an early 3-0 deficit, but Pearl River got an RBI single by John-Griffin Bell in the bottom of the sixth inning to go back in front 4-3.

With two outs, the Wildcats’ D.K. Donaldson grounded a ball along the first base line that looked like it was going to roll foul. The ball stayed fair, hit off the glove of first baseman Clay Benson, and Donaldson reached base while Tate Parker scored to make it 5-5.

Hinds put two runners on base in both the 11th and 12th innings. Both times, Pearl River pitcher Bobby Magee beared down and struck out two straight batters after getting into trouble.

Pearl River also left two runners on in the 10th inning, and then broke through in the 12th. Mercer led off with a double, then Soper followed with a single to center field. Hinds’ Josh Rodriguez made a strong throw to the plate, but Mercer slid across the plate headfirst as the ball skipped past the catcher.

“How ‘bout them Cats,” Pearl River coach Michael Avalon said. “I told the guys in the ninth inning that no matter what happened, I was proud of them. (Hinds is) a good team. They battled, fought, and scratched. They made us beat them. I am proud of a lot of dudes over here by me. What a special group. I’m very proud of that big win. Now we will try to get some rest and get ready for tomorrow.”

Soper had two hits for Pearl River, drove in one run and scored another. Alex Perry went 2-for-4 with a solo home run and two runs scored.

Magee earned the win with two innings of scoreless relief, despite pitching in and out of trouble in both of them.

Williams finished 3-for-6 with two RBIs and two runs scored for Hinds, and former Warren Central star Clayton Thurman was 2-for-4 with one run scored. Thurman also pitched three innings of relief. He allowed one run — the winning run in the 12th inning — and struck out four.

Kendrick Bershell, a former Vicksburg High standout, also pitched 3 2/3 innings. He had five strikeouts and allowed two runs, one earned, on three hits and one walk.

Bulldogs’ path to the postseason runs through No. 1…