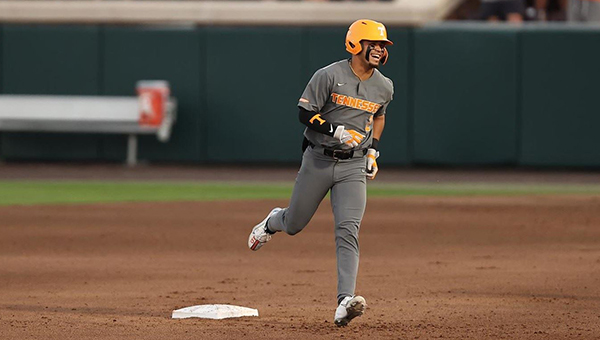 Tennessee's Jorel Ortega rounds second base after hitting a home run Thursday against Mississippi State. Ortega homered twice and drove in eight runs to lead the top-ranked Volunteers to a 27-2 blowout win against the Bulldogs. (Sloane Bush/Mississippi State Athletics)

No. 1 Tennessee tied a school record by hitting seven home runs — including three in a row in the first inning — and laid a historic beatdown on the Bulldogs, 27-2 in the opener of a three-game series Thursday night at Dudy Noble Field.

The 27 runs are the second-most Mississippi State has allowed in a game in the program’s 147-year history, behind only a 29-10 loss to Alabama in 1943.

The 25-run margin of defeat is the biggest in MSU history, besting the 22-run difference Florida State had in a 24-2 win over the Bulldogs in 1966. Tennessee set a record for its biggest-ever win in an SEC game, surpassing a 20-run margin in a 25-5 win vs. Georgia in 2010.

“I think the guys had a good vibe to them when they showed up at the park today. I think it carried over from their attitude and their performance on Tuesday. Then things went our way and it kind of snowballed,” Tennessee coach Tony Vitello said. “Regardless of what the scoreboard says, you either get credit for one win or one loss in each game and we’ll take the win at any time.”

Worse for Mississippi State (26-27, 9-19 Southeastern Conference) was what it did in the present. The Bulldogs need to win this series to have a chance at reaching the SEC Tournament and extending their season. They’ll now need to win the last two games against Tennessee (47-7, 23-5) and hope Kentucky loses at least two out of three against Auburn.

Kentucky and Auburn had their opener rained out Thursday. They’ll play a doubleheader Friday beginning at 1 p.m.

Mississippi State and Tennessee play Friday at 6 p.m. and Saturday at 2 p.m. The Bulldogs can only regroup after taking their worst loss ever in a game that only got worse as it went on.

Tennessee led 21-0 at the seventh-inning stretch and then added two more runs in the eighth inning and four in the ninth. It scored multiple runs in seven of the nine innings played and finished with 25 hits.

Mississippi State’s first hit came against the bullpen in the seventh inning, when Logan Tanner singled. Hunter Hines hit an RBI single later in that inning, and former Central Hinds star Tanner Leggett hit a solo home run in the eighth to account for the Bulldogs’ two runs.

Mississippi State only had five hits.

Saban walks back comments about Fisher; SEC reprimands both…