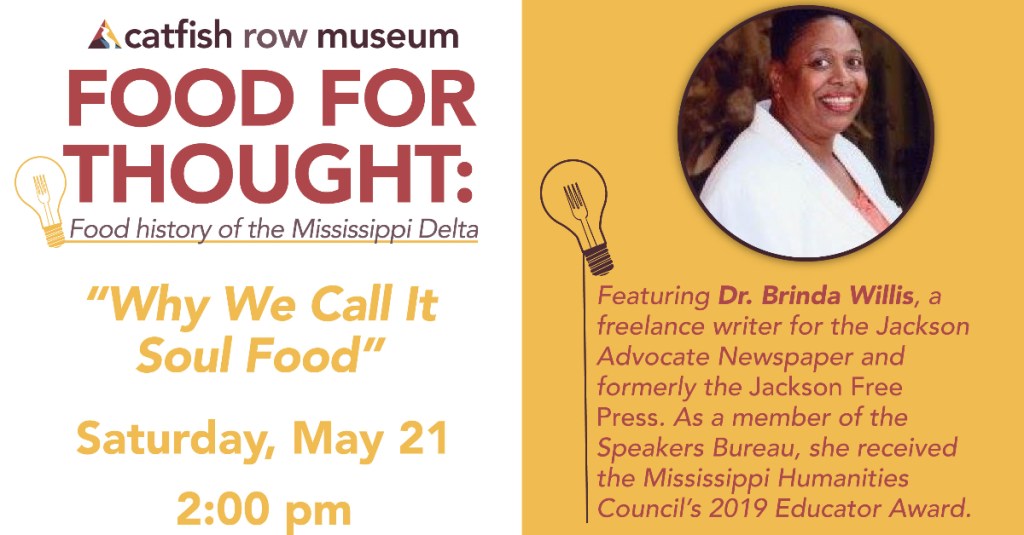 Before “farm-to-table” became a culinary movement, to Brinda Fuller Willis it was simply a way of life.

As one of 16 family members growing up in Attala County, Miss., by necessity the farm was never far from the table, and there were always mouths to feed.

“We had a garden that was probably an acre, and we raised everything from string beans to sweet potatoes,” said Willis, now a journalist, consultant and speaker. “We ate a lot of what people call traditional ‘soul food’ dishes — you know, okra, peas, corn, collard greens, that sort of thing.”

The Fuller farm spanned 200 acres outside of Kosciusko, planted mostly with cotton and stocked with chickens, pigs and cattle. Until she left home to attend Mississippi State University in the 1970s, though, she didn’t realize how different her neighbors’ foodways and lifestyles were.

What she found was often bland compared to the Afro-centric foods she was accustomed to eating, which were often seasoned with pork fat. For the first time, she saw rare steak and was horrified that anyone would eat meat that wasn’t cooked well done.

“The average Black person does not eat rare meat, because in slavery on the plantations, [we] never got to eat until the slave masters, or family and friends and whomever else, got to eat first,” she said. “So, by the time Black people got their food it was well done, and that has carried over into our culture. It made me more aware of my own culture.”

The differences were even noticeable in the desserts — instead of sweet-potato pie, which Black people prepared in the South where the tubers were abundant, there was pumpkin pie, which has its American roots with early English colonists.

“When I got ready to go home a lot of times, I would call ahead and tell my mother, ‘Would you please make such-and-such-a-dish for me?’ or call one of my aunties that lived not too far from me who made special dishes that I liked and that I always felt good about, and so I would call and ask for collard greens,” she said. “It not only nourished my body, but it nourished my mind, my body and my soul.”

Willis has written extensively about Black American foodways and will present “Why We Call It Soul Food,” the final installment of the inaugural Food For Thought discussion series at Catfish Row Museum on Saturday, May 21 at 2 p.m.

“Soul food is not just the dish itself, but the care that goes into it,” Willis said. “Black or white in Mississippi, all of us have a special auntie or our mothers who made specialty dishes for us as children growing up. Food brings a lot of things out — people sit on the porch and drink tea and wave at each other, and holler ‘hey’ to each other and speak to each other. It’s a way of life we grew up in, and how the soul is nurtured by the foods that we eat and the caring that goes into the food that we make as Mississippians and Southerners.”

During her presentation, Willis will discuss the origins of soul food and the history of African American foodways, as well as how those foodways intersect with other American cultures. Her talk will also touch on her experiences cooking and talking about food with friend Nick Wallace, a decorated chef based in Jackson who has competed in programs such as “Chopped” on the Food Network.

“Why I ended up calling it, ‘Why We Call It Soul Food,’” she said, “[is] because that feeling I got from the dishes that people who were in my childhood, who I had grown up eating their meals and their food, I saw the special love and caring that they always put into the dishes that they prepared for me.”

Food for Thought is made possible through a grant from the Mississippi Delta National Heritage Area.