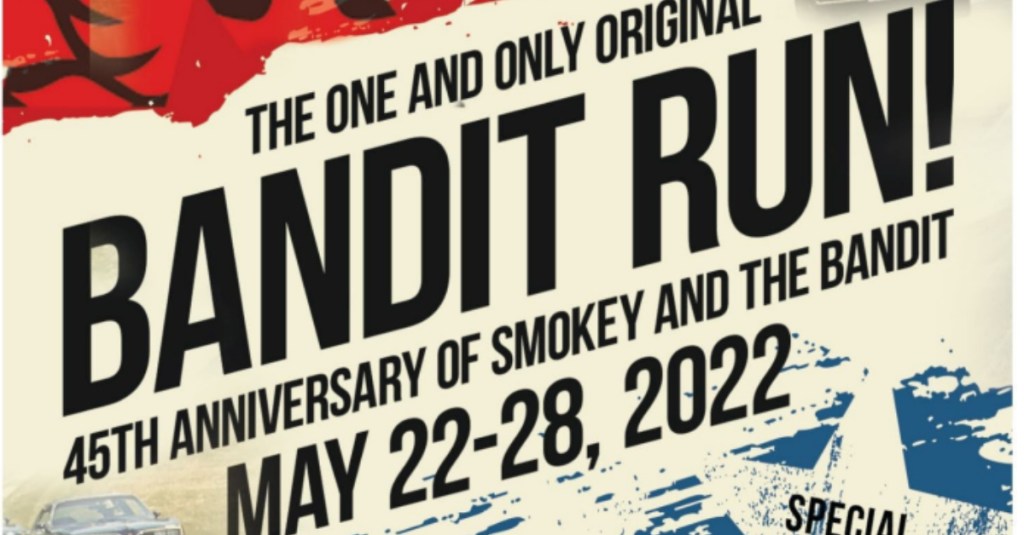 It’s been 45 years since “Snowman” Jerry Reed and “Bandit” Burt Reynolds had that CB conversation.

Forty-five years since a black and gold Pontiac Trans Am tore across the highways from Texarkana to Atlanta running blocker for a big rig hauling a load of illegal Coors beer. Released in 1977 and also starring Sally Field and the “Great One” Jackie Gleason, “Smokey and the Bandit” grossed a worldwide box office take of $300 million, second only that year to a little sci-fi movie called “Star Wars.”

Reynolds’ role in “Smokey and the Bandit” and the 1977 black and gold Pontiac Trans Am he was driving was the catalyst for a yearly event called The Bandit Run.

Brought to you by RESTORE a MUSCLE CAR (RAMC), a world-class restoration shop in Lincoln, Neb., The Bandit Run originated in 2007 when RAMC owner, Dave Hall and Trans Am enthusiast David Hershey of Keller, Texas decided to celebrate the 30th anniversary of the film “Smokey and the Bandit” by reenacting the quest to drive a load of bootleg Coors beer from Texarkana, Texas, to Atlanta, Ga. Response to that first year’s Run was so positive, that the event has continued for 16 years now, aside from 2020 when it was canceled by COVID-19.

Every 5th-year anniversary of the movie, the group makes the run from Texarkana to Atlanta. In the years in between, they map out a trip through different parts of the country, and to date have done several runs through the South, Midwest, East Coast, Florida and the Plains States.

Since 2022 marks the 45th Anniversary of the movie, the route is again from Texarkana to Atlanta, beginning this May 22 in Texarkana and ending just outside the Atlanta area in Helen, Ga. on May 28. This weeklong rolling tribute will have over 120 classic Trans Ams out on the open road.

Also on the run this year will be a replica of Snowman’s Rig like that driven in the movie by Jerry Reed, and it’s not unusual to see Sheriff Buford T. Justice “tail-grabbin’” a Runner or two in a replica cop car.

Events along the way where the public can see the Bandit Run, begin in Texarkana on Sunday, May 22 with a Show ‘n Shine at the Four States Auto Museum (217 Laurel St., Texarkana, AR) from 11 a.m. to 4 p.m. Over 125 Trans Ams, the Snowman’s Rig, a Sheriff Buford T. Justice police car, Burt Reynold’s last-owned Trans Am, and the Legendary Concepts Bandit Truck are expected to be on display for the public to enjoy.

Then on Monday morning at 10 a.m, be back at the Four State Auto Museum to see them send the Bandit Runners off to Atlanta with a bill for Big Enos Burdette for 400 cases of Coors with 45 years of accrued interest. As they leave, each Runner will be given a commemorative can of Coors as they drive off. Monday’s route will take the Runners along US-82 East till they turn south at Exit 22 in El Dorado, AR to take US-167/US-63 South toward their lunch stop in Farmerville, La. When they leave out of Farmerville, they’ll head to Vicksburg via highways LA-2, US-165 N, LA-554, LA-134, LA-425 and jump on I-20 at Rayville, La.

Tuesday’s route will take the Runners from Vicksburg to Pascagoula to Destin, Fla. They’ll leave Vicksburg at 8:30 a.m. and be heading down MS-27 South to MS-28 South to Magee for a gas stop, then take US-49 South to Hattiesburg where they’ll pick up I-59 to US-98 East and stay on that to MS-63 South, which they’ll take all the way into Pascagoula and the Senior Center (1912 Live Oak, Pascagoula, MS 39568). Arrival should be about 1:00 p.m. They’ll stop for lunch and a mini Show ‘n Shine till about 3:30 p.m., at which time they’ll head out for Destin.

Leaving out of Pascagoula to Destin, the Runners will take I-10 over to Mobile, AL and then FL-281 South to US-98 East into Destin. The Runners will be staying in Destin for some beach time until Thursday when they leave for Helen.

Thursday morning at 8 a.m. the Bandit Runners will leave on their last leg of the journey to Helen.

Once in Helen, the group will have one event on Friday where the public can see the cars and visit with the Bandit Runners. On Friday, May 27, they will be in the Helen City Park for a Show ‘n Shine from 11 a.m. to 4 p.m. with a special celebrity guest joining them to sign autographs.

The complete itinerary of the week’s activities of the Bandit Run is available here: https://drive.google.com/file/d/1HpYtxkBmkxtcjguqXh798SWD_6-BdCXP/view.