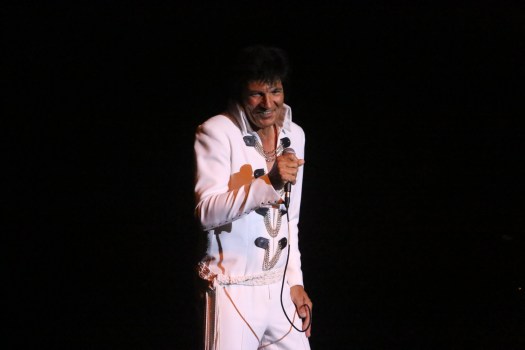 Elvis impersonator Jack Curtis took the stage last Friday for a special performance for members of the Sampler Antique Club at the Strand Theatre in Vicksburg. (Photo by Terri Cowart Frazier | The Vicksburg Post) 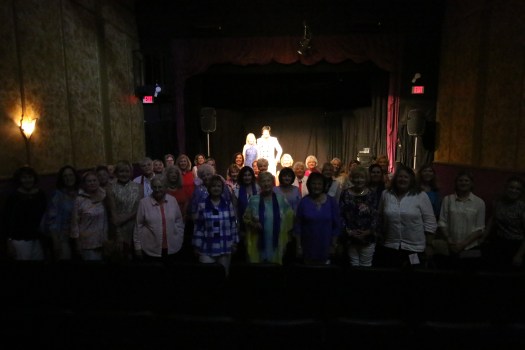 Members of the Sampler Antique Club pose with “Elvis” at their year-end meeting last Friday. (Photo by Terri Cowart Frazier | The Vicksburg Post)

Elvis may have left the building, but last Friday, he made his way back to the stage during a special performance at the Strand Theatre.

Decked out in a flashy white jumpsuit — a signature outfit typically worn by the King of Rock and Roll — Elvis impersonator Jack Curtis entertained members of the Sampler Antique Club during their year-end lunch meeting.

“It was a lot of fun,” Antique Club member Sandra Shingler said. “And he (Curtis) was fantastic. It sent me back to my teenage years.”

And of course, “Love Me Tender” was Shingler’s favorite song performed by the legend.

Lori Fagan, who serves as the president of the club, and who knew Curtis from when she lived in Tupelo,  booked his show for the Antique Club.

“Jack and I were in a business club together in Tupelo. His office was next door to my office, so we were just around each other a lot and he is just the nicest guy,” Fagan said.

But although Fagan said she was aware that Curtis was an Elvis impersonator, “Everybody in Tupelo knew,” she said. It wasn’t until he cut loose at a Business Club party that Fagan got to see him in action.

“We were doing Karaoke and he (Curtis) wouldn’t get up and sing, but when he finally did, he turned into Elvis. And I was like, ‘Wait a minute. Where’s my friend Jack? This is not his personality.’ He is so low-key and doesn’t like attention, and this guy just turned into Elvis and I was totally blown away,’” Fagan said.

The ladies attending the Antique Club meeting were also impressed.

Club member Jane Flowers said she was sitting in the back of the theater since she was serving as one of the 10 hostesses for the luncheon, and enjoyed watching those in front of her having fun during the show.

“They were all having such a good time,” Flowers said.

Elvis did not disappoint.

During the show, he presented his infamous scarfs he used to wipe the sweat off his face to some in the audience.

Shingler was not one of these lucky ladies who received one, but that didn’t matter. She enjoyed the performance just the same.

“He was one of the very best Elvis impersonators I have seen, and I’ve seen a lot,” she said.

Established more than 40 years ago, the Sampler Antique Club promotes knowledge, interest and appreciation of antiques and related subjects.

Membership is comprised of both active and associate members, with active members taking turns serving as hostesses for the meetings.

Meetings are typically held on the first Friday of the month during the calendar school year in members’ homes. Topics of programs vary and on occasion, the group will take field trips outside of Vicksburg to enjoy historical and cultural events.

Friday’s Sampler Antique Club meeting was not only held in the historical Strand Theatre; lunch was served in the old Adolf Rose building next door.