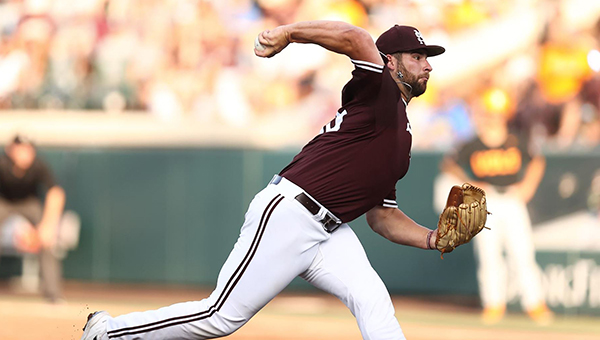 STARKVILLE — Mississippi State still has one game left in the regular season, but its dwindling chances of repeating as national champion finally came to an end Friday night.

With the loss, as well as Kentucky’s 5-1 win over Auburn earlier Friday, Mississippi State (26-29, 9-20 Southeastern Conference) was officially eliminated from contention for the last spot in the SEC Tournament.

Mississippi State failed to qualify for the SEC Tournament for the first time since 2015. It had reached the College World Series in three consecutive seasons and won it last year, but Friday’s loss was the latest in a season where little seemed to go right. It the team’s ninth loss in a one-run game.

Hunter Hines homered in the second inning and Kellum Clark hit a two-run double in the seventh to put the Bulldogs ahead 3-1. As has often been the case, however, the game slipped away late.

After Preston Johnson got the first two outs of the eighth inning on a total of three pitches, Tennessee had the lead after four more. Luc Lipcius doubled and scored on a single by Jordan Beck, and then Gilbert homered on the next pitch to put the Volunteers in front 4-3.

Tidwell (2-1) retired all nine batters he faced, striking out five, to close it out. His last pitch was a 99 mph fastball.

The Volunteers’ late rally spoiled an outstanding outing by Johnson. He pitched 7 2/3 innings, allowed only one walk, and struck out 10 batters. It was his sixth game of the season recording double-digit strikeouts. Three of the seven hits he gave up came in the eighth inning.

Troy Claunch hit a two-run single in the first inning to stake Texas A&M to a 3-0 lead, but the Rebels quickly made up the difference and then some.

Tim Elko hit a sacrifice fly in the bottom of the first and Hayden Dunhurst and T.J. McCants both had RBI singles in the second to tie it. Alderman’s two-run double in the third put the Rebels ahead 5-3 and they never trailed again.

Ole Miss starting pitcher Hunter Elliott pitched into the fifth inning after his shaky start. He was pulled in the fifth, however, and got a no-decision. Jack Washburn pitched 1 2/3 innings of relief for the win, and Josh Mallitz worked the last 3 1/3 innings for his first save.

Mallitz had four strikeouts, allowed two hits and no walks.

Ole Miss and Texas A&M will play again Saturday at 1:30 p.m. at Swayze Field in the regular-season finale. Both teams have clinched spots in next week’s SEC Tournament.

Crews was 2-for-4 with two homers and three RBIs, increasing his home run total this season to 20. He is 6-for-8 in this series with one double, three home runs, seven RBIs and five runs scored.

LSU starting pitcher Ty Floyd (5-3) earned the win, limiting the Commodores to one run on four hits in 5 1/3 innings with no walks and seven strikeouts.

LSU will go for the sweep Saturday at noon. It can also earn a top-four seed and a first-round bye in the SEC Tournament with a win and an Auburn loss at Kentucky.