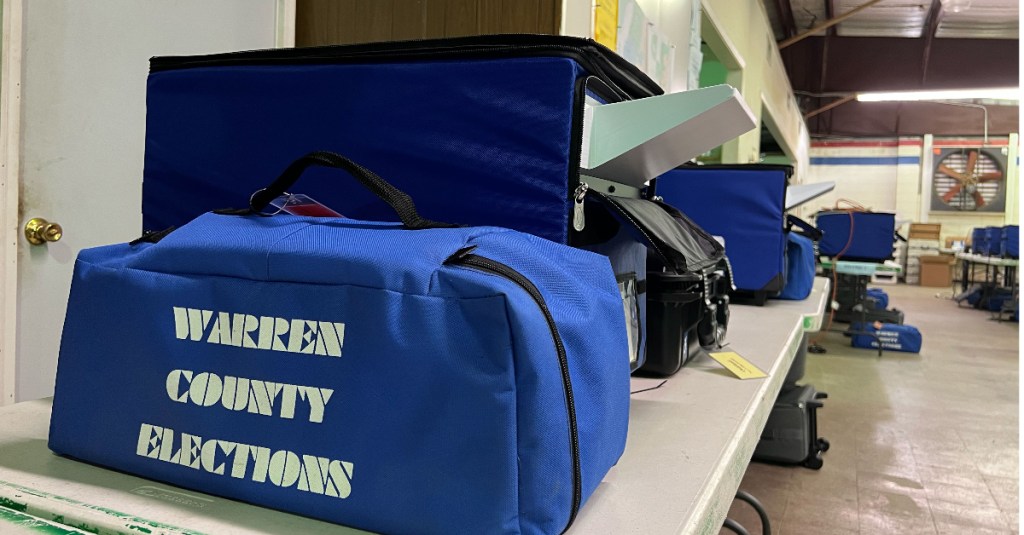 Warren County is now home to 23 new voting machines, and residents will have the opportunity to test them out next week, ahead of Mississippi’s June 7 Congressional Primary elections.

The voting systems, which the Warren County Board of Supervisors voted to purchase in August 2021, consist of VotingWorks VX Scan and VX Mark machines and a printer and cost approximately $100,000, paid for through the election support fund through the Mississippi Secretary of State’s office and HAVA grants.

Chairwoman of the Warren County Election Commission Sara Dionne said voting with the new machines will be easy for the public.

“When they walk in, they’ll check in just as they always have with the poll worker,” she said. “Then, they’ll be given a paper ballot. They will go to a privacy booth, mark their ballot, take it to the precinct scanner and just lay it on the tray. It’ll feed right in and they’ll be done.”

Dionne added that every polling place will have an ADA-compliant touchscreen computer that can be used by the visually or physically impaired. Voters can request earphones if needed, and the font size can be increased on digital machines. The touch screen also makes voting more accessible for those with motor skill issues that make holding a pencil difficult.

The Warren County Election Commission is providing voters the opportunity to come and test the system. These demonstration days are May 26 and 27 from 10 a.m. to 1 p.m. and May 28 from 9 a.m. to noon. The machines will be set up in the Warren County Courthouse lobby, at 1009 Cherry St.

The switch from the digital TSX-brand machines the county previously used to the VotingWorks paper ballot system is something Circuit Clerk Jan Daigre said provides a greater feeling of security for voters.

“There’s no computer involved, as far as marking your ballot,” Daigre said. “You mark the ballot and feed it into the scanner. People feel better about that.”

Dionne clarified that the digital machines were just as secure as the new paper ballot machines, but that the paper ballots will make it easier to count the votes in the event of a challenge.

“It’s a perception of security. The other machines we used were just as secure, but the public has a perception that they would like to have that paper ballot,” Dionne said. “At the end of the day, if there is a challenge or if someone wants a recount, we actually can count each individual ballot and the vote on it, or re-scan them again to get a count instead of just relying on computers.”

The new voting machines will also be better for the county’s approximately 175 poll workers, Dionne said.

After the polls close on election day, the poll machine manager will be able to use a smartphone camera to read a QR code on the final report, and it will instantly post votes from that precinct online. Results will also be embedded onto the Warren County website.

While absentee and affidavit ballots will still need to be counted, the unofficial results will be available in real-time.

The winner of that race will go on to face one of three Republicans running in the primaries: Republicans Michael Carson, Ronald Eller and Brian Flowers.