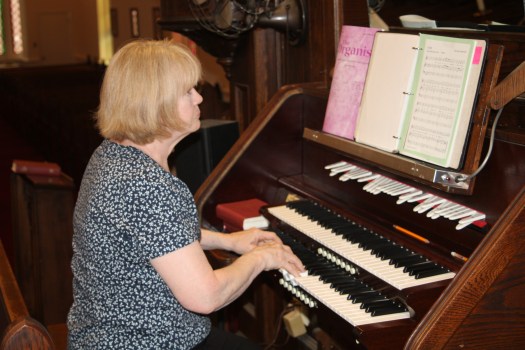 Christ Episcopal organist Marie Cunningham works the keys and tabs as she plays a selection on the church's organ. The church will be celebrating the organ's centennial in the fall. (Photo by John Surratt) 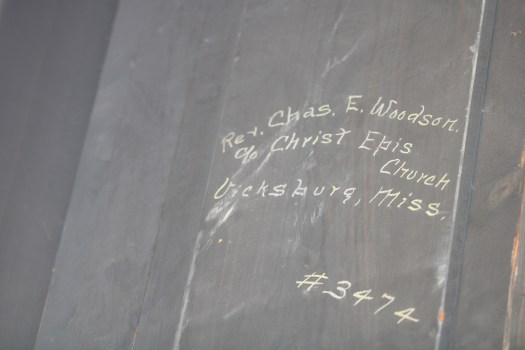 The names of the Rev.Charles Woodson, the rector, the church and the organ number were written on a section of the organ's shipping crate when it was sent to Christ Episcopal. The crate's wood was used to make the organ's swell box and is in the rear of the organ room. (Photo by John Surratt) 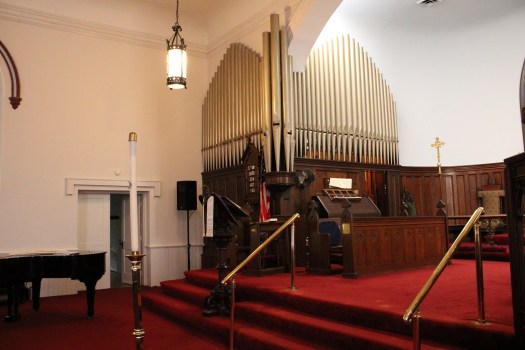 Sitting in a corner of the chancel at Christ Episcopal Church, the church's pipe organ looks the same as when was installed in 1922. The room where it was placed was once used by ministers to put on vestments. (Photo by John Surratt)

But Christ Episcopal Church’s organ is more than a number on a sheet of paper. It’s been an integral part of the church’s history and the music that flows from the pipes covering two walls in the front of the church has welcomed the congregation and accompanied the church choir since it was installed a century ago in 1922.

But when Christ Episcopal’s organ was installed, it caused a change in church custom that remains today.

“The first organ and the choir were in the rear of the church — that was the older style; the colonial style,” church historian George Downing said. “When the congregation of the church decided to move the organ and choir in front in the chancel, that was a change in style that had become popular.”

He said the organ was installed in a small room in the chancel, which he said was not originally designed to take an organ.

“It was built for the ministers to vest in (put on vestments),” Downing said. “It was a small room. As a child it was kind of a scary place; it was dark and it had pipes going up so it was a different sort of place.

“The crate it was actually shipped in was used for the swell box,” Lindsey said. “That was a rather unique feature at the time.”

The swell panel in the organ’s interior bears the organ’s number and the name of the church’s rector at the time, the Rev. Charles Woodson, who was rector from 1914 to 1946.

Lindsey said the swell division is all the pipes that are played on the (organ’s) upper keyboard.

The organ, he said, “Is pretty much original; there’ been a couple of small additions done over the years but what you see is the way it was when they put it together.”

He said the organ’s electric motor has been replaced, adding the motor, which develops the air pressure for the organ, and also at one time had a generator.

The organ, he said has several voices or sounds, and there are four basic sound families in a pipe organ.

“There’s principals, which are unique to the organ and basically what you hear when a hymn is being played,” he said. There are also “families” of sounds that can mimic orchestral instruments like strings, woodwinds and trumpets and other instruments.

All the sounds from the four basic groups are represented in the organ at Christ Episcopal, Lindsey said, “But it has multiple sounds, not just one of each.”

The organ uses metal and wooden pipes to produce its sounds and has three reservoirs, which Lindsey called a “wind regulator” to control the air pressure from the blower to allow the organ to operate properly.

Chris Episcopal rector the Rev. Sam Godfrey said the church will commemorate the organ’s centennial sometime in the fall with a concert and a rededication of the organ.

“We have not set a date,” he said. “But it will probably be in September or October.”