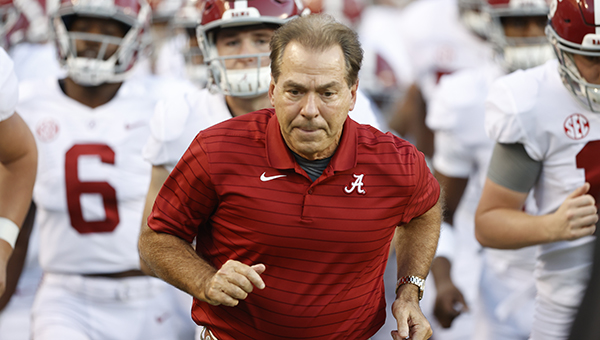 Alabama football Nick Saban runs onto the field with his team before a game last season. (Kent Gidley/University of Alabama Athletics)

I was all set to sit down and write this week’s column about the annual dead period in Vicksburg sports.

It’s the time when the high schools have finished their seasons but before they begin summer workouts, the calm before the postseason storm in college baseball, and when even youth sports are winding down or finished with their spring seasons.

And then Jimbo Fisher took a seat at the table.

In case you missed it, the Texas A&M football head coach called a press conference Thursday morning to respond to allegations that his program has used the NCAA’s new name, image and likeness rules recruits to pay recruits to come play for the Aggies.

The allegations were made by Alabama coach Nick Saban.

Speaking to a local business group in Birminghamon Wednesday, Saban said “A&M bought every player on their team. Made a deal for name, image and likeness. We didn’t buy one player. I don’t know if we’re going to be able to sustain that in the future because more and more people are doing it.”

A day later, Fisher responded with a press conference in which he alleged long-term cheating by Saban, called him “despicable,” and said he will not return Saban’s phone calls.

ow do you even begin to unpack all of this?

First off, it’s delicious sports theater. Nothing spices up the summer lull like a verbal bar brawl between hall of fame-caliber coaches who normally go out of their way to avoid speaking ill of each other.

Secondly, this ought to make the next couple of months interesting. SEC Media Days in July might turn into Wrestlemania if Saban and Fisher cross paths. The AFLAC duck might need a referee’s shirt for the next commercial Saban and Sanders do together.

Thirdly, Saban’s criticism raises eyebrows but not in the way he probably intended.

It might have been warranted 10 years ago, but in 2022 the new NIL rules have turned college recruiting into the Wild West. Paying players is no longer against the rules. It might even be encouraged at this point. If Texas A&M did sway players with the possibility of riches, so what? Like it or not, that’s how the game is played now.

Saban’s remarks also bring to mind some old sayings about glass houses and rocks, and black pots and kettles.

For 15 years Saban’s Alabama teams have dominated college football. A large part of his success has stemmed from landing a couple dozen 4- and 5-star recruits every season. Heisman Trophy-winning quarterback Bryce Young is reportedly racking up nearly $1 million in NIL deals.

Suddenly, however, Saban has a problem with other schools landing those kinds of recruits and players signing NIL deals? It reeks of hypocrisy, and of a coach who is seeing a key advantage eroding.

It also strains disbelief that Saban, for all his greatness, is claiming to have won five national championships in 15 years while playing against a stacked deck. That sound you hear is every Ole Miss and Mississippi State fan laughing at the suggestion that poor old Alabama might have to compete for players in the new world of NIL deals, or might have to settle for signing 18 instead of 23 of the country’s top 200 high school players each year.

Saban is a great coach, maybe the best ever, who has turned playing football for Alabama into the sports equivalent of having a law degree from Harvard or Yale. On this issue, though, he looks like a whining fool.

Ernest Bowker is the sports editor of the Vicksburg Post. He can be reached at ernest.bowker@vicksburgpost.com