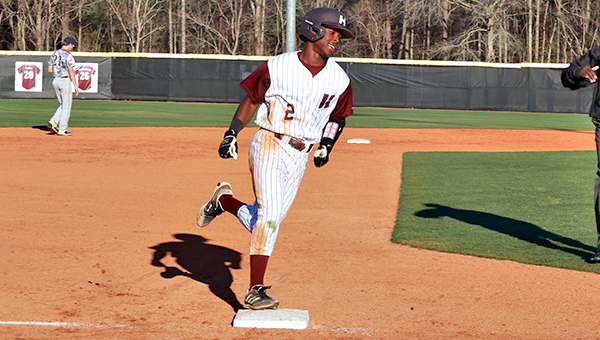 Vantrel Reed capped off a remarkable baseball season with a prestigious honor.

The Hinds Community College infielder and former Warren Central star was selected as a first-team all-state player by the Mississippi Association of Community Colleges Conference on Monday.

Reed has signed with LSU-Shreveport, a baseball powerhouse that is set to play in the NAIA World Series beginning May 27.

Reed batted .444 (8-for-18) with one home run and four RBIs in four games at the NJCAA Region 23 tournament last week. His home run in the ninth inning of an elimination game against Pearl River briefly gave Hinds the lead, but the Eagles wound up losing in extra innings.

“Vantrel impacted our team in so many ways, in terms of his offense, defense, baserunning and leadership,” Hinds head coach Dan Rives said in a news release announcing the all-state awards. “He plays the game the right way, and that’s at full tilt all the time. He had numerous hits and made many plays when the game was on the line, and our team almost expected him to always come through, even in the most clutch situations.”

Townes, a Southern Miss signee, led the conference with nine wins. In 78 innings of work, the Ridgeland native struck out 98 batters.

“Holland was the ultimate competitor every single time he took the hill and his numbers definitely reflected that,” Rives said. “He gave everyone in our program a sense of confidence when he was on the mound because we knew he was going to compete with all he had and be consistent with three pitches.”

Rodriguez was second on the team in batting average with .346 and was tied with Reed for second in home runs. The New Jersey native led the Eagles in doubles, with 14, and was second in RBIs with 43.

“Josh provided stability in the middle of the lineup all season long and was a good defensive presence in center field after Tyree (Carr) went down with an injury,” Rives said. “His power production was impressive, and his charisma and leadership abilities will be sorely missed.”

Thurman, a former Warren Central standout, played third base and was a consistent bat in the lineup. He finished with a .298 batting average, 23 RBIs and three home runs. Thurman also was a pivotal piece of the Eagles’ bullpen, tying for the MACCC lead with six saves.

“We would be hard pressed to find a better competitor than Clayton,” Rives said. “His consistency at third base and at the plate, and the confidence that he gave our team when he was on the mound was tremendous. He tied for the league lead in saves and gave us such a steady presence all season long. His toughness was on full display, in the postseason especially, and he really helped set the tone for how we want to play the game the right way.”

A total of 30 players — 15 on the first team and 15 on the second — were selected to the All-MACCC team.
Northwest Mississippi catcher Ryan Lee was the conference’s Player of the Year, and Pearl River’s Mike Avalon was the Coach of the Year.

Avalon led Pearl River to a 40-10 record, the Region 23 championship, and a berth in the NJCAA Division II World Series that begins May 28 in Enid, Oklahoma. Pearl River is ranked No. 1 in Division II.