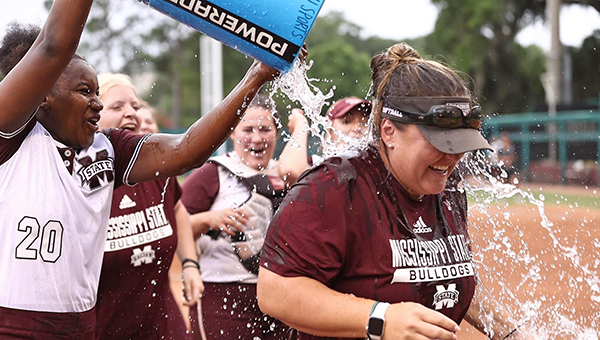 TALLAHASSEE, Fla. — Nothing is ever impossible, but the feat Mississippi State’s softball team pulled off sure seemed improbable.

The Bulldogs won four consecutive elimination games, including two against No. 2 national seed Florida State on Sunday, to win the NCAA Tournament’s Tallahassee Regional and advance to the super regional round for the first time in the program’s history.

Arizona beat Missouri 1-0 on Sunday to finish an undefeated run through the Columbia Regional.

“There’s really not any words. It was a full team effort. I thought they believed. They bought in. Everybody was pulling the same direction on the rope all day long,” Mississippi State coach Samantha Ricketts said. “The energy from everyone running in whether it was defensive replacements or the ones leading the cheers and energy in the dugout. I think it’s just a huge moment for this program, for Mississippi State softball and for the Bulldogs. And I’m just so proud to be their coach.”

Mississippi State lost its regional opener to South Florida, 4-0, which forced it to battle through the losers’ bracket of the four-team regional. It knocked off Howard, 6-3, and beat South Florida 6-0 in a rematch on Saturday.

On Sunday, the Bulldogs steamrolled Florida State 5-0 — Aspen Wesley pitched a two-hit shutout and Mia Davidson homered — to force a winner-take-all matchup for the regional title. They then overcame an early deficit by scoring three runs in the fifth inning to win the finale 4-3.

Shea Moreno hit an RBI single and Chloe Malau’ulu drove in the go-ahead runs with a two-run single during the winning rally. Malau’ulu batted .500 (7-for-14) with two doubles and two RBIs in five regional games.

Annie Willis pitched five innings of shutout relief for the Bulldogs in the clincher. She allowed six hits and two walks, worked out of jams in the third and fifth innings, and retired the last six batters she faced.

Mississippi State became the first team in the history of the tournament to eliminate a No. 2 national seed in the regional round.

Florida State (54-7) had a 24-game regional winning streak snapped. The Seminoles won the 2018 national championship and reached the Women’s College World Series championship series in 2021. They failed to reach the super regional round for the first time since 2012.

“I think it was like (Malau’ulu) said and like what Ricketts said, why not us?” Davidson said. “Everybody’s going to count us out. We’ve just got to focus on each other and believe in one another. And we did and that’s all that really we’re trying to focus on.”