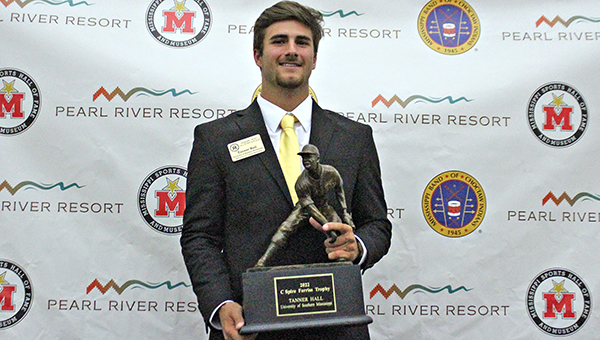 Tanner Hall responded with five shutout innings to lead the Golden Eagles to a 10-7 victory and, right then and there, Berry said he knew he had something special.

“He came in in relief, covered five innings, had great stuff, was under the moment on a huge stage and he handled it so well. Then he picked up in the fall from where he left off,” Berry said. “It was evident that he was going to be our weekend (starter).”

The sophomore right-hander from Zachary, La., was honored Monday as the winner of the C Spire Ferriss Trophy, given to the top college baseball player in Mississippi.

Hall beat out four other finalists to win the award — Tim Elko of Ole Miss, R.J. Yeager of Mississippi State, Harrison Haley of Delta State and Brett Sanchez of Belhaven.

“It’s an honor. I didn’t really expect anything like this. It’s crazy,” Hall said. “This event is something that I couldn’t even imagine being at. It’s a huge honor to be a part of it. To win it is insane.”

Hall began the 2022 season as Southern Miss’ midweek starter but did not stay in that role for long. A string of dominant performances in the first month of the season landed him the role of Friday night ace for the Conference USA season opener against Florida Atlantic on March 18.

From there, Hall lived up to the job.

Hall pitched at least seven innings in five consecutive starts and was twice named the Conference USA Pitcher of the Week. He finished the regular season with a 7-2 record and 2.68 ERA in 15 total appearances. Opponents are hitting just .227 against him.

“I kept telling myself to keep my head up. I knew going out there as a midweek guy, that was exciting for me. So to be able to move up to Friday is even more exciting,” Hall said. “It’s another thing to keep me going and drive for me. It’s unbelievable to think that things could start one way and switch up and go another.”

Hall’s best asset has been his control.

Hall ranks eighth in the country with 120 strikeouts, is second in strikeout-to-walk ratio, and eighth in walks per nine innings. Hall’s 12.00 ratio is second only to the 15.50 mark of Navy’s Nate Mitchell. He’s walked 10 batters in 87 1/3 innings.

“His confidence level is what I feel like separates him from a lot of people,” Berry said.

With Hall leading the way, Southern Miss (41-14) rolled to the Conference USA regular-season championship. Southern Miss will be the No. 1 seed when it hosts the C-USA Tournament this week at Pete Taylor Park, and Hall will be on the mound for Wednesday’s opener against UAB at 4 p.m.

He and the Golden Eagles are hoping to exit Conference USA with their sixth tournament title — they’ll move to the Sun Belt Conference for 2023 — and perhaps earn the right to host an NCAA Tournament regional.

Whatever the next few weeks have in store, Hall seemed happy to take a few minutes Monday to celebrate the unusual journey thus far.

“Just because you start off somewhere doesn’t mean that’s where you’re going to finish. If you keep doing your thing something’s going to happen and things are going to fall into place,” Hall said. “Either way, you’re contributing for your team and that’s kind of what matters in this.”