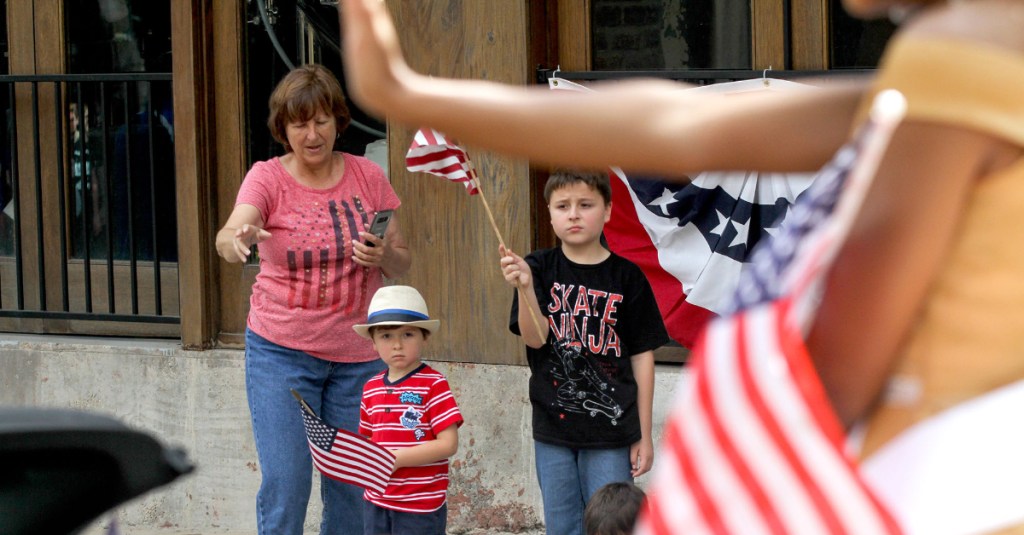 Two boys holding American flags wave to passengers on a float during Vicksburg's Memorial Day parade in 2019. After two years of virtual broadcasts, the parade and other parts of the city's Memorial Day program will be live Monday. (File Photo | The Vicksburg Post)

Concerns over COVID-19 forced program organizers to eliminate the program’s parade and present the annual observance in a virtual format that was streamed over Facebook and other social media.

“We had a speaker last year and a speaker the year before, but they were virtual,” said Willie Glasper, one of the program’s organizers. “We never stopped doing it. I just feel that whatever is going on, we still need to recognize our veterans. It’s something dear to my heart. I just don’t feel that we give them enough homage. Everything is going to be full-blast this year.”

The theme for this year’s event is “Lest We Forget.”

“I put on the program, ‘All gave some. Some gave all,’ and Memorial Day is really when we focus on those who gave all; they gave their lives, they gave everything,” Glasper said.

The program begins Monday at 10 a.m. with a parade of veterans, followed by a memorial service at 11 a.m. at the Vicksburg Auditorium. Col. Teresa Schlosser, commander of the U.S. Army Engineer Research and Development Center, is the parade grand marshal and the featured speaker for the memorial program.

A wreath-laying service will be held at 12:30 p.m. at the National Cemetery at the Vicksburg National Military Park, including a Memorial Day observance by a park representative.

On Saturday, the Military Park in partnership with the Friends of the Vicksburg National Military Park and Campaign, Four Seasons of the Arts and the Mississippi Symphony Orchestra will provide an outdoor pops concert on the grounds of the park free of charge in front of the park’s Visitor Center at 3201 Clay St.

On Friday, volunteers will place flags at the markers in the National Cemetery.

“The volunteers will check in at 7:30 a.m. and we’ll issue flags for them to put out at 8 a.m.,” said park ranger and volunteer manager Taylor Hegler. “We have volunteers signed up and we are anticipating over 100 because some people don’t register and just show up.”

She said the plan is to have flags at all 18,000 markers in the cemetery.

Hegler said some families come out together and place the flags.

“We push for family stewardship,” she said. “We encourage them to make it a fun family day.”