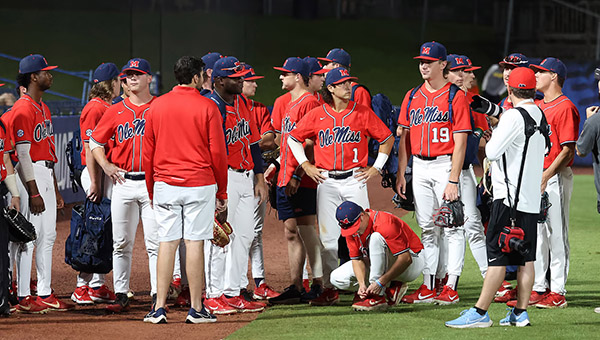 HOOVER, Ala. — Ole Miss waited six hours to play on Tuesday. Now it’ll wait almost a week to find out its fate.

Considered a bubble team for the NCAA Tournament, Ole Miss did itself no favors with a quick exit from the Southeastern Conference Tournament.

Carter Holton threw six shutout innings to lead No. 8 seed Vanderbilt to a 3-1 victory over the ninth-seeded Rebels in the single-elimination first round.

Ole Miss dropped to No. 38 in the NCAA’s RPI rankings, which weigh heavily in determining the at-large berths for the NCAA Tournament.

Baseball America projected Ole Miss as the last team into the 64-team field following Tuesday’s loss, but that could change as conference tournaments play out this week. The Rebels will have to wait until Monday at 11 a.m., when the bracket is announced live on ESPN2, to see if they’ve done enough to get a bid.

Coach Mike Bianco said until then it’ll be hard to hide from the speculation about whether his team is in or out.

“What are you going to do, take their iPhone away? Or ask them to not put any more predictions out? It’s the world that you live in, you can’t hide from it,” Bianco told media after the loss to Vanderbilt. “Just handle it maturely and understand we had some control of it tonight, now we don’t have any control of it.”

Ole Miss and Vanderbilt (36-19) both spent a lot of time waiting Tuesday as off-and-on rain throughout the day reconfigured the entire SEC Tournament schedule. Tuesday’s late game between Auburn and Kentucky was pushed to Wednesday morning, and the Wednesday late game with LSU and the Auburn-Kentucky winner to Thursday at 9:30 a.m.

The Commodores took a 1-0 lead in the bottom of the third inning when Spencer Jones doubled with two outs and scored on a single by Dominic Keegan. They added a run in the fifth on an RBI groundout by Parker Noland, and another in the sixth when Carter Young doubled and scored on an error.

Ole Miss scored its lone run in the seventh when Peyton Chatagnier led off with a walk and scored on Justin Bench’s two-out single.

Vanderbilt bounced back after getting swept by LSU to finish the regular season, and advanced to play No. 1 seed Tennessee late Wednesday in the double-elimination round.

Holton (8-3) allowed three hits and two walks, while striking out six for Vanderbilt. Christian Little struck out four of the six batters he faced, pitching two shutout innings to notch his third save.

Holton has not allowed a run in his last 25 2/3 innings covering four starts.

Ole Miss starter Dylan DeLucia was effective despite receiving the loss. The junior allowed two runs on six hits in 4 1/3 innings. Josh Mallitz allowed a single unearned run over 3 2/3 innings out of the bullpen.

“That was a well-pitched ballgame. That’s a very difficult lineup to get through. The fact we could get through them and minimize damage was a great thing for us,” Corbin said. “Carter certainly threw well, Christian behind him, we played pretty good defense, saved a run early with a catch and had good enough offense to win the game.”