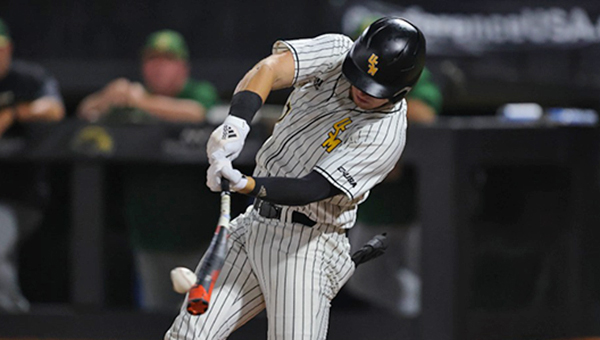 HATTIESBURG — A sleepy Southern Miss earned the right to sleep in on Thursday.

Slade Wilks hit a long, tiebreaking home run in the fifth inning and the Golden Eagles made it stand up as they beat UAB 4-3 late Wednesday night in a first-round game at the Conference USA baseball tournament at Pete Taylor Park.

The game, the third of four originally scheduled for the day, started more than five hours late because of several weather delays and ended just after midnight. Because of the delays, the last game of the night between UTSA and Florida Atlantic was postponed until Thursday morning and Thursday’s late game to Friday.

The Golden Eagles could use the rest after a difficult, contentious opener. They were never able to shake UAB, which got solo home runs from Christian Hall and Josh Sears in the first half of the game.

Southern Miss scored twice in the bottom of the fourth inning to take a 3-2 lead. Blake Johnson hit a sacrifice fly and Carson Paetow scored on a balk. The balk call was argued by UAB coach Casey Dunn and led to his ejection.

Sears’ home run tied the game at 3 in the fifth inning, and then Wilks went deep in the bottom half to put Southern Miss ahead for good.

USM pitcher Tanner Hall (8-2) had 10 strikeouts in 6 1/3 innings and earned the win. Relievers Dalton Rogers and Landon Harper both pitched out of inherited jams to close it out, and Harper pitched the last 1 2/3 innings for his 11th save of the season.