HERO OF THE WEEK: Jim Moretz is a hero of all trades 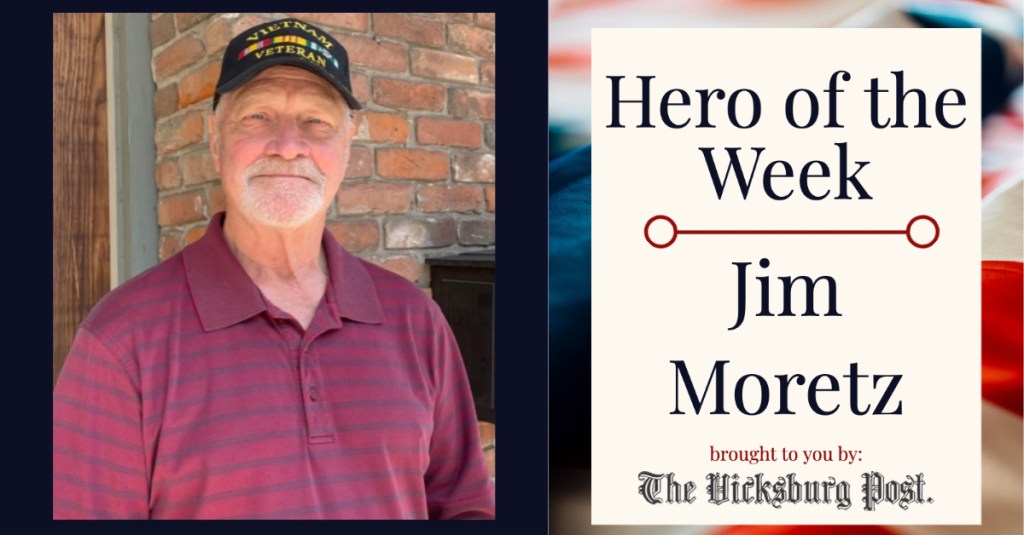 This week’s Vicksburg Post Hero of the Week is Jim Moretz, who served as a Civil Engineer for the Air Force during the Vietnam War and later joined the Air Force Office of Special Investigations (AFOSI).

After graduating from high school in Spain, Moretz said that he went to the U.S. embassy to register for the draft and was given the 1A status.

Moretz and his family returned to the United States and continued to wait for another update from the U.S. Military. While he was waiting, Moretz stated that life was good since he was able to get a job at Western Electrical and purchase his first car.

“I wasn’t ready to go right away into the military, but my dad found this Air Force recruiter that told him about this program where if I sign up now, I would start training six months later,” Moretz said.

He signed up for the program and the following week received a phone call to start basic training. Soon after, he began training in Montana as a carpenter and was taught by older civilians that knew the trades of plumbing, electrical work and other appliance maintenance.

“I would go to the base and just work with the older civilians that knew how to do plumbing, electrical and construction work,” Moretz said.

After two years of working as a carpenter, Moretz requested to become a civil engineer.

In the middle of 1969, Moretz was given an order to go to Vietnam. He stated that he was originally stationed at a radar site; however, it was destroyed. Instead, he was sent to the main headquarters on the outskirts of Da Nang and close by Monkey Mountain.

Once in Vietnam, his responsibilities expanded beyond just paperwork to plumbing, electrical and construction work. He mainly rebuilt supporting radar sites for flight missions that were damaged by the hurricanes.

“We were in the North Vietnam area, so we were a big target for the enemy. They would try to attack us with mortars, but they couldn’t really hit us,” Moretz said. “So they would hit the smaller bases around us.”

In October of 1970, Moretz returned from the war. Soon after, he began looking for a job to help support his family. He stated that he has always been interested in a career in law enforcement but was unable to at the time due to having to move the family to Washington D.C. or already having too many applicants in the police academy.

He then decided to reenlist in the Air Force and was able to choose to work at the base in Spokane, Wash. as a civil engineer. Years later, Moretz still wanted to be in law enforcement and knew about the Air Force Office of Special Investigations (AFOSI), so he decided to apply.

“I got in and my first assignment was in New Mexico,” Moretz said.

Moretz worked as a Federal Investigator for the AFOSI and was even sent to Seoul, South Korea as counter-intelligence where he worked with South Korean police and military.

Moretz served in the Air Force for 20 years before working for Lockheed Martin.