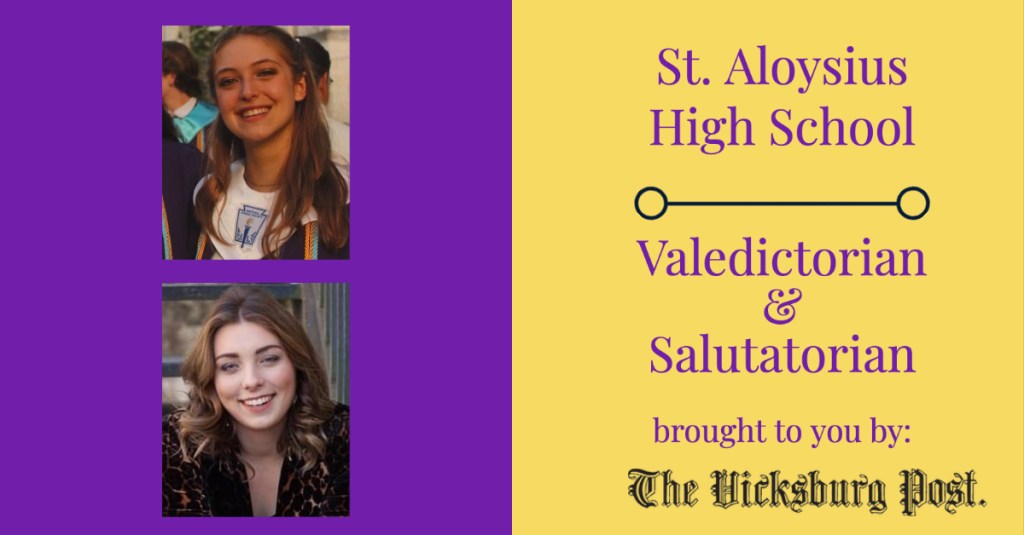 The commencement ceremony for the 2022 graduating class of St. Aloysius High School was held Tuesday, May 24 at the Vicksburg City Auditorium.

During the service, Christina Waisner was recognized as the class valedictorian and Leah Larson as salutatorian.

Waisner, who is the daughter of Scott and Eileen Glynn, graduated with a 4.52 GPA.

Upon learning she had earned the top spot in her graduating class, Waisner said she felt honored and happy, while also having a sense of gratification knowing her hard work had paid off.

“I felt joyful, but more than that, I felt fulfilled,” Waisner said. “I worked hard to get my class rank, and I felt that every sleepless night and every moment of doubt could be excused — and even celebrated — in the face of what I perceive as a massive accomplishment. I felt immeasurably proud of myself for persevering and sticking with my goal, even when it was difficult.”

Being named valedictorian, Waisner said, had been a goal of hers ever since she learned what the honor meant.

“I knew I wanted to try for it, and I knew that achieving that goal would serve as proof to myself what I was capable of. I’ve always struggled with self-doubt and excessive self-criticism — a result of my perfectionist nature — so it means a lot to have a tangible reminder of what I can do if I set my mind to it” she said.

Determined to reach her goal, Waisner said, she worked to do her best at staying focused.

“And I learned that the secret to success was to discard all negativity. Optimism is the secret to opportunity; if you don’t believe you can do it, you won’t ever pursue the paths to success that will open to you” she said. “Adopting a positive mindset is truly the lifeblood of my motivation and the only reason I was able to hold onto my goals and keep going.”

In pursuit of her goal, Waisner said those cheering her on included her family, friends and teachers.

“They (friends and family) consistently uplifted me, but they also let me know that failure was okay. If things didn’t go perfectly, they still kept me calm and let me know that my success did not define how they viewed me” she said. “That kind of impartial and unconditional support is the only reason that I felt brave enough to reach beyond mediocrity and out of my comfort zone. That is the only reason I pursued the strenuous courses I did. And to that extent, I want to thank my teachers. Their unwavering confidence is what emboldened me to reach so far.”

Waisner plans to attend the University of Mississippi. She said she was currently undecided on a specific major but was considering journalism and pre-law.

“I want to make a difference in the world, and I think both of these career paths will help me contribute to boosting others’ quality of life and ability to protect themselves and their rights,” she said.

Her honors include STAR Student, the Ronald Reagan Award for leadership and drive, the Joan Thornton Award for heroic leadership, the valedictorian award and Honor Graduate status.

Leah Larson is the daughter of Steve and Linda Larson.

She is graduating with a 4.0 GPA. While at St. Al, Larson was a member of the Vicksburg Swim team and the St. Aloysius Swim Team, where she set multiple records. She was also a member of the National Honor Society, Mu Alpha Theta, the basketball team, choir, chess club and Quiz Bowl Team. Larson also served as a YMCA lifeguard and YMCA swim instructor.

Her honors include the St. Aloysius Service Award and the Bruce Alan Ebersole Jr. Memorial Award.

Larson said when she learned she had been named her class salutatorian, she was “surprised.” She said it had never been a specific goal.

“My goal was always centered around challenging myself with difficult classes. I never thought that I would end up being salutatorian,” she said. “There were plenty of kids at school that I could’ve easily been beaten by, it just came down to little things here and there.”

Larson said Wayne Scott, who is the program director of aquatics and fitness at the YMCA and who had hired her as a lifeguard and swim instructor for the Y, had been instrumental in her endeavors.

“He has always been very supportive in everything I’ve done as a student and continues to help me push myself and learn. I wish him a happy retirement,” she said.

Larson plans to attend the University of Southern Mississippi and study nursing.

“Eventually, I want to become a nurse-midwife,” she said.