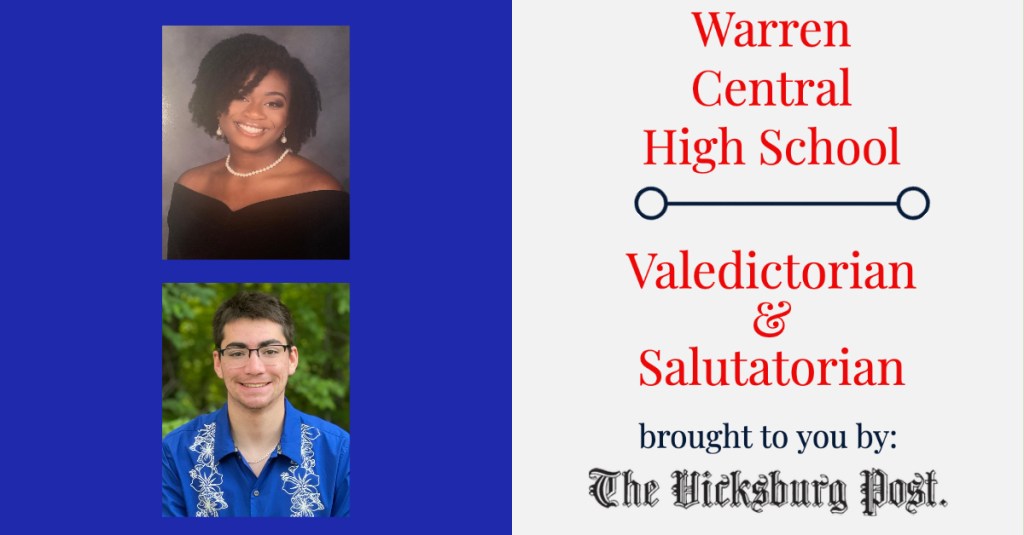 With a graduating class of 225, two students in Warren Central High School’s class of 2022 set themselves apart.

Monroe is the daughter of Cedric and Vanessa Douglas. She is graduating with a 4.729 GPA.

Monroe said she was “elated” upon hearing the news, and was proud her hard work had helped her reach her goal.

“This was a goal I have had since I was little,” Monroe said.

“I have always strived to be the best that I can be. I did my best to take the most rigorous courses, studied hard, and always came out with a grade that reflected my ambition to be the best,” she said. “Most of my course studies have consisted of Dual Credit Classes through Hinds Community College, some AP classes and various honors courses.”

Monroe said she had been encouraged to strive for her goals by teachers, friends and family.

“I would like to thank all of the teachers I’ve had throughout the years, my friends and my family. The staff who I feel have impacted me the most were Mrs. Sara Teague, Mrs. Allison Cox, Mr. Ben Battle, Mrs. Kristy Brannon, Mr. Terry Wong, Mrs. Flo Strawn, Dr. Jace McMullin, Mr. Cody McElwain, Mrs. Jennifer Normand, who was my counselor, Dr. Naomi Welch, and Mrs. Tina Hodnett,” she said. “All of the support and encouragement I have received has really influenced me and my drive to do my best. My friends and family were always there for me whenever I doubted myself.”

Monroe plans to attend USM and study Forensic Science with a chemistry minor.

“I aspire to become a crime scene investigator with the FBI,” she said.

In addition to being named class valedictorian, Monroe’s dedication to her studies has also garnered her several scholarships including a $3,000 Mutual Credit Union Scholarship, a $1,000 Junior Auxiliary of Vicksburg Scholarship, a $2,000 USM Honors College Student Scholarship and a $6,000 USM Luckyday Citizenship Scholarship. She also received the Vicksburg NAACP Bettye Smith-Brown Scholarship in the amount of $10,000, and a University of Southern Mississippi Academic Excellence Scholarship that covers school tuition.

She served as the president of the National Honor Society, secretary of Mu Alpha Theta and was on the Mississippi Department of Education Superintendent Student Advisory Council. Monroe was a member of Key Club, the ACME Lead Team and the Red Cord Service Club. She was a member of the Big Blue Marching Band, Warren Central’s Wind Ensemble and the volleyball team.

During her valedictorian speech, Monroe said she plans to reflect on the previous years that led to her class’s graduation, while also emphasizing the strength and resilience present within the class.

Byrd is the son of Aaron and Marisol Byrd.

He said one of his goals was to earn the highest score, a 5, on his Calculus AP test. Byrd was successful in achieving his goal as well as being named Warren Central’s STAR Student. The STAR Student program is sponsored by the Mississippi Economic Council’s M.B. Swayze Foundation and recognizes the senior in each graduating class with the highest ACT. To be eligible, students must score at least a 25 on the ACT and hold a cumulative average of 93 in core classes through the first semester of their senior year.

Byrd was a member of the Red Cord Service Club, the National Honor Society and Mu Alpha Theta.

He was also a member of the WCHS swim, cross country and track teams, the Big Blue Band and he participated as a crew member during musicals.

Byrd’s plans are to attend Brigham Young University and become an aerospace engineer.

“I hope to work at Lockheed Martin designing fighter jets,” he said.

Byrd admitted he was a bit apprehensive about giving his salutatorian speech, but when speaking, he said, he will share a few memories from high school.