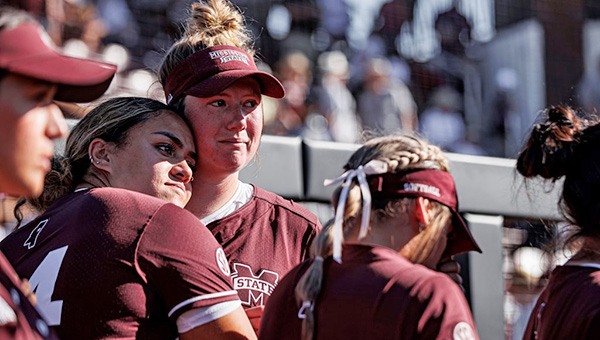 Carlie Scupin homered during a seven-run fourth inning, and pitcher Devyn Netz allowed one run in a complete game as Arizona beat Mississippi State 7-1 in Game 2 of their NCAA Tournament super regional series.

Arizona (38-20) swept the best-of-three super regional and advanced to the Women’s College World Series for the third season in a row and 25th time overall. The last of its eight national championships was in 2007.

Mississippi State (37-27) reached the super regional round for the first time, but wasn’t able to go further. Still, the ride there was perhaps the best moment in the program’s history.

Mississippi State won four straight elimination games to win the Tallahassee Regional last weekend, and played in front of two sellout crowds at home in the super regional to shine a bright light on a team that is often overshadowed.

“It wasn’t an easy road to get here by any means. We had our ups and downs and bumps and bruises along the way. I think that’s why we’re on this stage right now and why we were one of the last 16 teams standing,” MSU coach Samantha Ricketts said. “Just incredibly proud of their fight and their grit and the growth that they’ve shown and really just their ability to put Mississippi State softball on the map.”

Saturday’s attendance of 2,299 was a Nusz Park record and the largest collegiate softball crowd on record in the state of Mississippi. It broke the record of 2,209 set Friday in Game 1. Both games sold out in a matter of hours earlier in the week.

Along with a national television audience on ESPNU, Ricketts and her players said they were blown away by the fan support.

“I am thankful for the Bulldog faithful to show up and show out. They had our backs. I hope that we made a couple of thousand new fans from people who maybe tuned into softball for the first time. Hopefully, they want to come back,” Ricketts said. “I remember looking up in February and only seeing 14 fans. Going from 14 to 2,000 plus was amazing.”

Madisyn Kennedy hit an RBI single in the second inning Saturday to put Mississippi State ahead 1-0, and pitcher Aspen Wesley breezed through the first three innings without giving up a run.

Then things turned south in the fourth inning.

Izzy Pacho drew a one-out walk and Scupin followed with a home run to right field to put Arizona ahead 2-1. The next six batters reached base, including two on errors and one on a bases-loaded walk, as the Wildcats blew it open. A two-run single by Sharlize Palacios capped the rally and made it 7-1.

“We talked about the snowball (effect) and the big inning all year long, and at times it’s been our Achilles heel. Unfortunately, not the stage to have an inning like that,” Ricketts said. “I thought Aspen had a couple of chances when she was ahead in the count where she couldn’t put them away, and then when she was getting ground balls, we couldn’t back her up and play behind her. Against a team like that, they’re going to capitalize on mistakes, and I felt we just gave them too many chances.”

Netz did not allow a hit over the last three innings to keep the Bulldogs at bay, and Arizona punched its ticket to the WCWS in Oklahoma City.

Arizona improved to 5-0 in the postseason, after losing four of its last six games in the regular season.

“I think that during our losing streak, we all had one on one meetings with coach. Everything that we were doing in practice looked phenomenal, we just couldn’t put it together in a game,” Netz said. “We all had our meetings and she told us to surround ourselves with each other and build off one another. We worked hard as a team. We had to go through rock bottom, but it is so worth it now.”