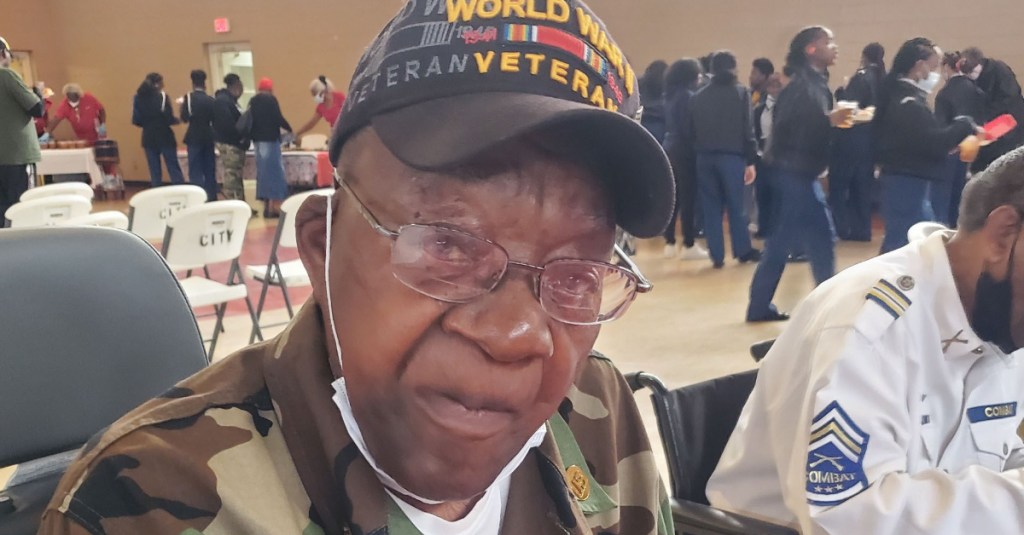 In October 2021, William “Bill” Mitchell was back on familiar ground — an airport tarmac watching classic warbirds cross the skies over Mound, La., during the Southern Heritage Air Foundation’s second Warbirds, Wings, and Wheels show at the Vicksburg-Tallulah Regional Airport.

A World War II veteran, Mitchell, 96 of Tallulah, enlisted in the Army Air Corps in 1944 and served on the island of Okinawa during the final years of World War II.

“I was in the 47th Air Service Command attached to the 5th Air Force,” he said. “We were a service unit; we did mechanical work. I was in the 2300 Quartermaster Trucking Company. Our unit was entirely Black except for the commanding officer, who was white.”

The unit’s primary mission was moving supplies from ships to the Air Corps units stationed on the island.

“The planes we serviced mostly were C-47 transports — cargo planes. We also did some service for the B-24s (bombers) and some of the fighter planes — P-47s,” Mitchell said. “I was a buck sergeant and I was in charge of 17 trucks and one jeep and a weapons carrier. We had a wrecker that followed the convoy and pretty well, I drove the wrecker.”

Sometimes, he said, the wrecker had to haul trucks back to the base for repairs.

“Some got damaged, some got wrecked and some just quit,” he said. “We lost one man because the truck ran over a mine. We were a service unit, so we got the dirty details.”

Until he enlisted, Mitchell said, “I’d never been more than 80 miles from my home in Concordia Parish.”

Mitchell went from San Antonio to Irvine, Calif., to gunnery school, where he and other airmen learned to fire .50-caliber machine guns.

He added that he later learned the Air Corps was considering transferring the trained gunners working in the service units to fly with B-24 Liberator bombers.

“They were losing so many B-24s and gunners, and they were going to transfer gunners to B-24s, but the war ended before that,” he said.

After gunnery school, Mitchell returned to San Antonio before going to Seattle, Wash., where his unit shipped out for Okinawa.

“We stayed on the ship 52 days from Seattle to go to Okinawa,” he said. “We were held up because of sea battles near Okinawa.

“We were on a converted freighter, the Gen. Buckman; it was hot,” he added. “Every time they had battle stations with the Navy, we had to go into the hold and get out of the way and it was hot down there. There wasn’t any air conditioning, only fans.”

And the battle for Okinawa was still raging when Mitchell and his unit arrived.

“They were fighting on the north end; when we landed we landed on the south end,” he said. “I saw a lot of dead people — Japs. They were all over.”

Because their equipment had not arrived, the men in Mitchell’s unit were assigned to duty far different from driving trucks — laying a steel mat to provide a surface for aircraft to operate until engineers could build a more permanent facility.

“We did that until our equipment arrived and we got organized. It was raining the whole time — the monsoons,” he said.

Mitchell was on Okinawa when the U.S. dropped the atom bomb on Nagasaki, Japan.

“We saw a flash in the sky like lightning,” he said. “We didn’t know what it was until they told us the next day. We were glad because that was going to end the war. We knew they were fixing to go to Japan and if they had, I probably wouldn’t be here now.”

“They were talking about having problems in Korea and I got scared and got out,” he said. “I’d had enough.”

After leaving the reserves, Mitchell went to work for a company in Sondheimer, La., but left after a year to go to work for a private individual.

“He taught me how to weld and I worked for him for 40 years,” he said. “I retired when I was 84 years old. I welded and worked as a mechanic. I worked on a lot of tractors. I learned a lot of that — mechanic — in the army so I did a lot of work.

“I was always mechanical-minded; I could look at something and pick it up,” he added. “They (the Air Corps) made me a mechanic and then a corporal. I kind of enjoyed the Army after basic training. I liked Kelly Field; I loved Kelly field.

“It’s a funny thing; sometimes I dream I’m still in the army.”