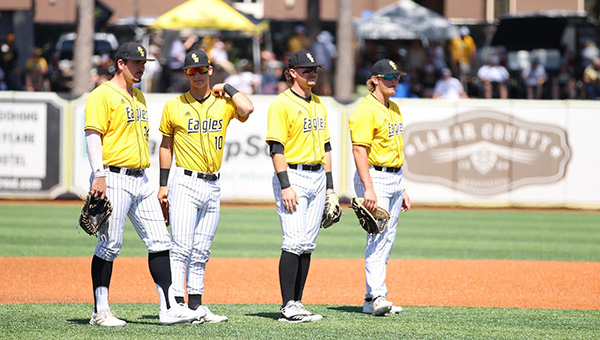 Southern Miss baseball players stand on the field during their 11-2 loss to UTSA in the Conference USA Tournament on Saturday. Southern Miss was eliminated from the tournament. (Joe Harper/BGNPhoto.com/Southern Miss Athletics)

HATTIESBURG — Southern Miss’ NCAA Tournament resume is complete. Now, it’s just a matter of seeing whether it’s good enough to get what they want.

Daniel Garza threw eight solid innings out of the bullpen and UTSA blew open a close contest with a six-run rally in the eighth inning to beat Southern Miss 11-2 in the Conference USA Tournament semifinals on Saturday.

UTSA (38-19) beat Southern Miss for the second day in a row in the tournament and advanced to Sunday’s championship game against Louisiana Tech. UTSA is in the C-USA championship game for the first time since 2014.

Louisiana Tech defeated Old Dominion 8-7 on Saturday, on a walk-off two-run single by former Clinton High School and Hinds Community College star Walker Burchfield with one out in the bottom of the ninth inning.

Southern Miss (43-16) has done enough to qualify for the NCAA Tournament, but has hopes of earning a top-16 national seed that would allow it to host a regional next weekend.

A conference tournament title certainly would have bolstered the Golden Eagles’ case, but now they’ll have to wait and see if a 2-2 showing this week is enough to push them over the top.

The NCAA Tournament selection show is Monday at 11 a.m. on ESPN2.

UTSA handed Southern Miss both of its losses in the C-USA Tournament, first in a winners’ bracket game on Friday and then again Saturday afternoon.

Garrett Poston hit a two-run home run in the second inning, and the Roadrunners scored two more runs in the third to take a 4-0 lead. Southern Miss cut the deficit in half in the seventh, on an RBI single by Carson Paetow and an RBI groundout by Gabe Montenegro, but UTSA blew it open in the eighth.

A two-run double by Jonathan Tapia and a two-run triple by Shane Sirdashney were the big blows in a six-run inning. The Roadrunners batted around and got six hits as they went ahead 10-2.
Matt King hit an RBI single in the ninth for UTSA’s final run.

Poston finished 3-for-5 with two RBIs and two runs scored, and Ryan Flores had three hits for UTSA.

In five games this season against Southern Miss, Flores hit .684 (13-for-19) with three homers and eight RBIs, including the game-winning, ninth-inning home run in a 7-6 win on Friday.

Ryan Ward started on the mound for UTSA. He pitched a 1-2-3 first inning, but left after hitting Christopher Sargent to lead off the second. Garza came on in relief and went the rest of the way.