2022 All-County Track and Field: PCA’s Llopis was a stealthy champion 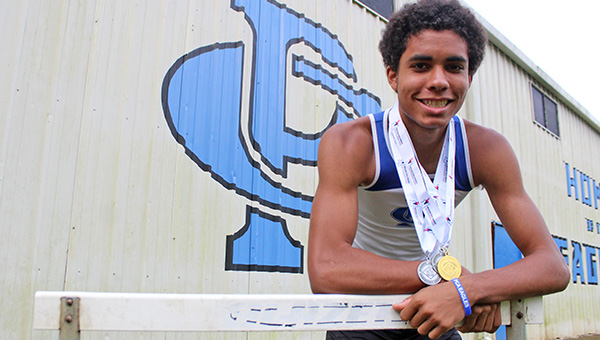 Porter's Chapel Academy's Daniel Llopis is the 2022 Vicksburg Post boys track and field Athlete of the Year. Llopis won the MAIS Class 3A championship in the 400 meters, and finished second in the 300 meter hurdles and 200 meter dash. (Ernest Bowker/The Vicksburg Post)

Elite track athletes are often compared to other speedy things, like racecars and rockets. Daniel Llopis was more like a stealth fighter jet.

The Porter’s Chapel Academy junior competes for a school without much of a track and field pedigree. Its last state champion was in 2005. Llopis himself had not run track until this season. When it came time to strike, though, he arrived hard and fast and left his mark.

Llopis won the MAIS Class 3A championship in the 400 meters, and was second in the 300 meter hurdles and 200 meter dash. He ended PCA’s long gold medal drought, and picked up one last honor by becoming the school’s first Vicksburg Post track and field Athlete of the Year.

“It’s pretty amazing. I keep thinking I’m Mr. Hotshot now, but I’m still working toward next season and doing better,” Llopis said with a laugh. “My parents are very proud of me. I couldn’t have done it wihthout Coach (Blake) Purvis and my dad. I thank my dad for taking me to the track meets and cheering me on. My parents were a big help. I wanted to prove that Porter’s Chapel could do something.”

The Post’s award caps off a big 2021-22 sports year for Llopis. He was an All-MAIS Class 2A kicker and punter in football and made the MAIS soccer all-star game after scoring 20 goals during the season.

Then he decided to run track for the first time and quickly had his eyes opened to what he’d gotten into.

“I knew I was fast, but track’s a whole lot different. You think you’re fast and when you get out there you really see the competition you’re up against,” he said. “I definitely thought it was going to be a challenge. I worked at it and I did pretty well.”

Llopis got better as the season went along, and even throughout the postseason. He finished fourth in the District 3-3A meet in the 400 meters, third in the 200 and second in the 300 hurdles. He was third in both the 200 and 300 the following week at the Class 3A North State meet, although he did win the 400.

His modest performances in the earlier rounds helped him go into the Class 3A state meet with no expectations and no pressure.

“I was just having fun. I didn’t know how I was going to do. I was very, very nervous. I just did it,” he said. “My dad said you’ve got this, and my mom called me during the meet to congratulate me, so I thank both of them for the support.”

Llopis’ first event of the state meet was the first on the day’s schedule, the 300 hurdles. He led with 50 meters to go before fading and finishing second to DeSoto School’s Nash Von Kanel. It set the tone for what turned into a remarkable day.

Llopis returned to the track about six hours later for the 400 and smoked the field. His winning time of 53.17 seconds was a personal best, and two seconds ahead of Von Kanel. Shortly afterward, Llopis added a silver medal in the 200 meters to the day’s haul.

“When I ran my first one and got a medal I thought, ‘I can really do this,’” Llopis said with a laugh.

Earlier in the meet, Llopis said, no one knew what Porter’s Chapel Academy was. He was happy to give them a bit of a lesson and put the school on the map as far as track and field goes.

“When I was at the state meet this girl came up to me and she was like, ‘What’s PCS?’ I said it’s PCA, Porter’s Chapel Academy,” he said. “It’s kind of off to the side and not really out there as much as the other schools. It felt good to be up there on the podium and get Porter’s Chapel recognized. It felt like I was representing the school pretty well.”

Now that he’s had a taste of track success, Llopis said he likes it. He’s started looking into the possibility of running at a junior college and using the sport to help further his education.

“I’ve looked into some colleges for track and things like that. Academics is part of it. There’s kicking (in football) as well, so over the summer I’m working at running, kicking, practicing as hard as I can and trying to get a scholarship,” Llopis said. “My plan is I want to go to a junior college and then a four-year.”

First, though, he has another year of high school and another season to get through. He wants to add the long jump and 100 meter dash to his repertoire while he chases a few more gold medals in 2023 — and all of that will come after he plows through football and soccer season.

“It feels pretty good,” Llopis said of his athletic success. “High school sports in general are pretty fun for me. I’m trying to make something out of it my senior year.”