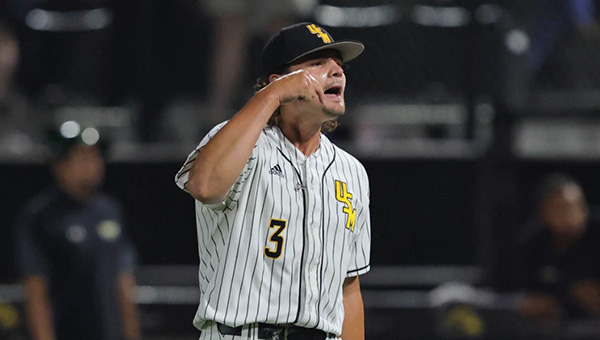 Southern Miss pitcher Landon Harper celebrates after getting out of an inning against UAB in the Conference USA Tournament. Southern Miss was selected as one of 16 regional host sites for the NCAA Tournament that begins later this week. (Joe Harper/BGNPhoto.com/Southern Miss Athletics)

HATTIESBURG — Southern Miss is staying at home for the first leg of the NCAA Tournament — and that’s a good thing.

Southern Miss was selected as one of the 16 regional hosts for the tournament, which begins later this week. It’s the third time in school history that Pete Taylor Park will be the site of a regional, along with 2003 and 2017.

Southern Miss (43-16) lost in the semifinals of the Conference USA Tournament on Saturday, but are No. 17 in the latest NCAA RPI rankings.

The full 64-team NCAA Tournament field will be released at 11 a.m. Monday on ESPN2. Game times and matchups will be set aat that time.

Tickets for the Hattiesburg Regional will go on sale Monday at 8 a.m. and are available by calling 1-800-844-TICK, visiting SouthernMissTickets.com, or in person at the Pat Ferlise Center on campus.

The top 16 seeds for the NCAA Tournament were awarded regionals. Four teams from the Southeastern Conference and four more from the Atlantic Coast Conference were among them.

From the SEC, Tennessee, Texas A&M, Auburn and Florida were selected.

Tennessee defeated Florida 8-5 on Sunday to win the SEC tournament championship for the first time since 1995, and will presumably be the No. 1 overall seed for the tournament after posting a 53-7 record.

Virginia Tech, North Carolina, Louisville and Miami were picked as regional hosts from the ACC.

The Big 12 will have two hosts, Texas and Oklahoma State, as will the Pac-12 with Oregon State and Stanford.