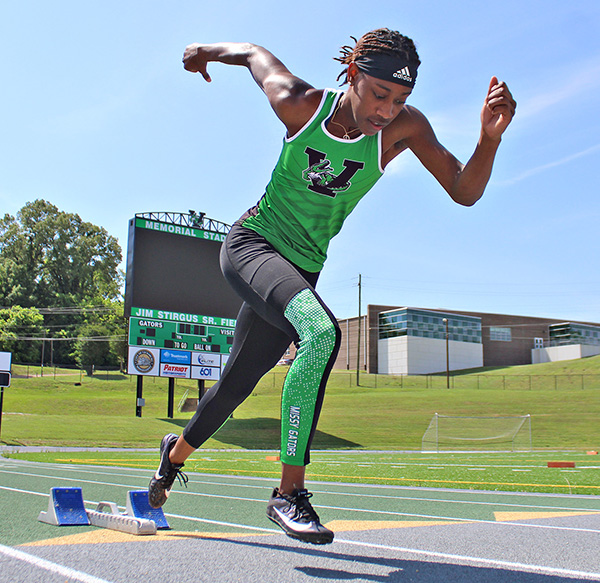 Vicksburg High's Layla Carter is the 2022 Vicksburg Post track and field Athlete of the Year. Carter reached the MHSAA Class 5A state meet in four events, and finished third in the triple jump and 300 meter hurdles. (Ernest Bowker/The Vicksburg Post)

Layla Carter won a lot of track and field events in 2022 — most of them, in fact.

On the last Saturday in April, however, it simply wasn’t her day. One by one, her chances at state championships slipped away. A complicated tiebreaker knocked her down to fifth in the high jump. A pair of exceptional performances by opponents pushed her to third in the triple jump.

As she came to the end of her final individual event, the 300 meter hurdles, the Vicksburg High junior was in fourth place.

Carter didn’t settle for that. She dug deep, cleared the final hurdle, and found another gear when her feet hit the ground. Carter outran Brookhaven’s Chrisiyona Quarles to the finish line and beat her by .08 seconds to steal third place and a bronze medal.

“She slowed down so I took my chance and I caught her. It felt great. It didn’t feel good to her, but it felt good to me,” Carter laughed.

Something else that felt good? Winning the 2022 Vicksburg Post girls track and field Athlete of the Year.

Carter was one of only two female athletes from Warren County to win two medals at this year’s state meets, by picking up a second bronze in the triple jump to go along with her one in the hurdles.

Carter reached the state meet in four events and won the MHSAA Class 5A North State championship in three of them. Her overall dominance during the season more than made up for a series of setbacks in the championship round.

“I wasn’t really expecting it, but I tried my best in everything that I did and I’m proud of myself,” Carter said of winning the award.

Carter also received Vicksburg High’s female Athlete of the Year award for her overall athletic success this school year. She averaged 11.8 points and 7.9 rebounds per game to lead the Missy Gators to the Region 4-5A basketball title, then moved to the track.

Carter reached the Class 5A state meet in the 100 meter hurdles and two relays in 2021, her first to compete in track, and took it to another level in 2022.

She won the high jump and 300 hurdles titles at the Division 4-5A, Region 2-5A, and North State meets. She was second in the triple jump in the first two rounds of the postseason, then overcame Jim Hill’s Jada Cavett to win at North State.

Carter also qualified for the state meet in the 4×400 meter relay with teammates Kadajia Allen, Shaniyah Walker and Terri Boyd. They finished seventh.

“Last year I went (to state) for four events, too. But this year to go for three individuals and one relay was a big difference,” Carter said. “I learned that I really have to work if I want to get a medal and that’s what I did.”

Carter said she also learned what it’ll take to push through to the next level and become a state champion. As good as this year’s performance was, there were several opponents who were simply better. She plans to work to change that this summer.

“All the competition up until state wasn’t really competition. When I got to state I saw that I needed to work harder to actually win,” she said.

That said, being third among dozens of competitors from all across Mississippi wasn’t too bad, she admitted.

“I never did anything like this before,” she said. “I love being an athlete. I love what I do, and I just want to get better at it.”