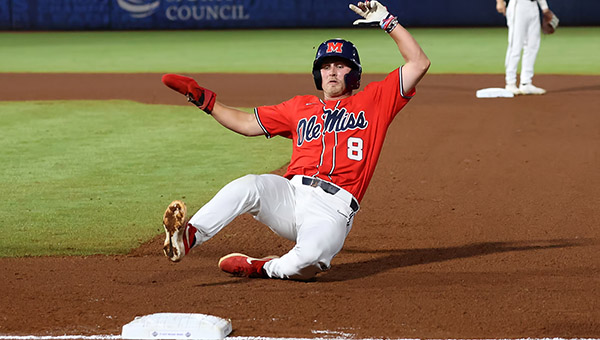 Ole Miss' Justin Bench (8) slides into third base during an SEC Tournament game against Vanderbilt last week. Ole Miss earned an at-large bid to the NCAA Tournament on Monday, and will open against Arizona in the Coral Gables Regional. (Michael Wade/Southeastern Conference)

Ole Miss went from first in the country to the last team into the NCAA Tournament.

The Rebels received an at-large bid to the NCAA Tournament as the 64-team bracket was released on Monday, and will play in the Coral Gables Regional hosted by Miami.

The Ole Miss-Arizona game will be televised on ESPNU.

Ole Miss was ranked No. 1 in the country in March, but had a 16-18 record in its last 34 games and was 14-16 in the Southeastern Conference. Its rough second half of the season put it on the NCAA Tournament bubble, and a first-round loss to Vanderbilt in the SEC Tournament didn’t help.

The Rebels, though, squeaked past North Carolina State to earn the final at-large bid. North Carolina State had a higher RPI ranking than Ole Miss — No. 33 vs. No. 39 — but Army athletic director Mike Buddie, the chairman of the NCAA Division I Baseball Committee, said Ole Miss’ series wins over Auburn and LSU put it just over the top.

Auburn is the No. 14 national seed and LSU was also considered a potential regional host leading up to selection day.

“What was interesting was in their 10 ACC series, N.C. State won four of those 10 but only one of those that they won was against a team that was in the field. Ole Miss also won four of 10 series in the SEC, but they had series wins over Auburn and LSU,” Buddie said on ESPN’s NCAA Tournament selection show. “Minuscule differences, but when it gets down to that time of the selection minuscule differences can sometimes make the difference.”

While Ole Miss had to sweat out its selection, Southern Miss only waited Monday to find out who it would be paired up with. Southern Miss was announced as one of 16 regional host sites on Sunday night, and it wound up with the No. 11 national seed.

Southern Miss and Army will play first on Friday, at 1 p.m. LSU and Kennesaw State play at 6 p.m. Both games will be streamed on ESPN+.

It’s the third time, along with 2003 and 2017, that Southern Miss has been selected as a regional host. Its only regional championship came in 2009.

Southern Miss won the Conference USA regular-season championship and is in the NCAA Tournament for the sixth consecutive season.

LSU was among the schools hoping to land a regional bid, but finished just outside the top 16. It will instead make a relatively short trip to Hattiesburg for its 10th consecutive NCAA Tournament appearance.

The Tigers have reached the super regional round five times in the past six seasons. This is their 34th overall appearance in the tournament.

Tickets for the Hattiesburg Regional are available by calling 1-800-844-TICK, visiting SouthernMissTickets.com, or in person at the Pat Ferlise Center on campus from 8 a.m. to 5 p.m. All-session tickets are $115 for chairback seats, $90 for general admission and wheelchair seating, and $45 for students from the participating schools.

Southern Miss and Ole Miss were the only two Mississippi teams to make the tournament, but four teams from Louisiana got in.

In addition to LSU, Louisiana Tech, Southeastern Louisiana and Louisiana-Lafayette