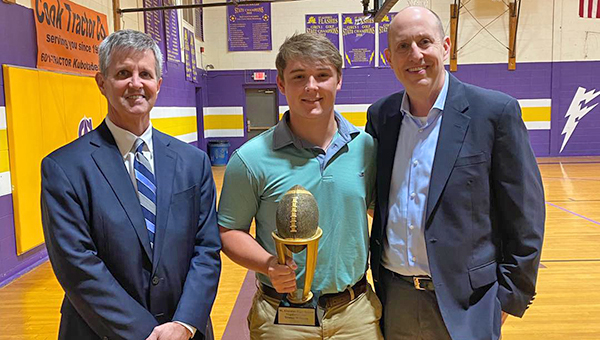 Tristan Wilbanks, center, won the 2022 Virgadamo Award during St. Aloysius' athletic awards banquet. The Virgadamo Award is given annually to a top player and team leader on the St. Aloysius football team and is regarded as the school's highest athletic honor. Pictured with Wilbanks are former Virgadamo winners Corey Pinkston (1985) and Murray Pinkston (1977). (Photo courtesy of Vicksburg Catholic School)

The silly answer is “Pilgrims.” I think the real answer is “awards lists.”

Among the many celebrations at the end of the school year in May are the annual athletic awards ceremonies for our four local high schools. These are fantastic events that honor not just the top athletes at each team and school, but individual achievements that might fly under the radar as well.

On my end, it’s a little less fun. I’m happy to recognize these folks in the paper and on our website, but retyping or formatting a list of a hundred or so names can make your eyeballs bleed.

Stuffed in among the horde of MVPs, most improved players, coaches awards and position awards, however, there is always one name that catches my eye — Virgadamo. It’s one that’s especially appropriate for Memorial Day weekend, as well.

Anthony Paul Virgadamo was a 1948 graduate of St. Aloysius High School. He played football and a couple of other sports and by all accounts was a popular student, but the thing that immortalized him here in Vicksburg happened 2 1/2 years later.

Virgadamo moved to Gulfport after graduation and joined the United States Marine Corps. He rose to the rank of corporal and was eventually sent to fight in the Korean War in 1950.

Virgadamo was with the 5th Marine Regiment, 1st Marine Division, and other United Nations forces when they came under a surprise attack by Chinese forces near the Chosin Reservoir in North Korea.

For more than two weeks in late November and early December, the UN forces battled the Chinese and brutally cold weather as they retreated 78 miles to a planned evacuation at the port city of Hungnam.

The evacuation route was down a single road lined with hills. To make it to safety, the UN forces needed to clear the enemy out of those hills as they proceeded. On the sixth day of the battle, Dec. 2, they reached a place they called Hill 1542 and the assignment to clear it fell to the 5th Marine Regiment, 1st Marine Division.

Virgadamo did not survive the fight. He was killed during the battle for Hill 1542 and buried alongside the road with a number of his fellow Marines. The battered survivors reached Hungnam on Dec. 13, but Virgadamo was counted among nearly 6,000 American soldiers killed or missing in the battle whose participants are often called “The Chosin Few.”

Virgadamo’s remains were never returned to the United States. His name is listed on a number of Korean War memorials around the country and, bringing us full circle, here in Vicksburg on the Virgadamo Award.

The trophy was originated by Virgadamo’s friends and classmates in 1951 to honor his memory. It’s given each year to a St. Aloysius football player who excels not only on the field, but exhibits leadership as well, and is considered the school’s highest athletic honor. This year’s recipient was senior quarterback Tristan Wilbanks.

It’s appropriate that the day we remember those who have sacrificed their lives for our great country comes at the same time we send hundreds of fresh high school and college graduates into the world. The endless freedom and possibilities in front of them are what our soldiers have fought and died for for the past 250 years.

As we celebrate the launch of so many young adult lives this Memorial Day weekend, take also a minute to remember people like Anthony Virgadamo who gave theirs to help us reach this point in history. They might just seem like names on a list or a memorial, but each of them gave everything they had and everything they’d ever have to ensure the rest of us could have something worth having.