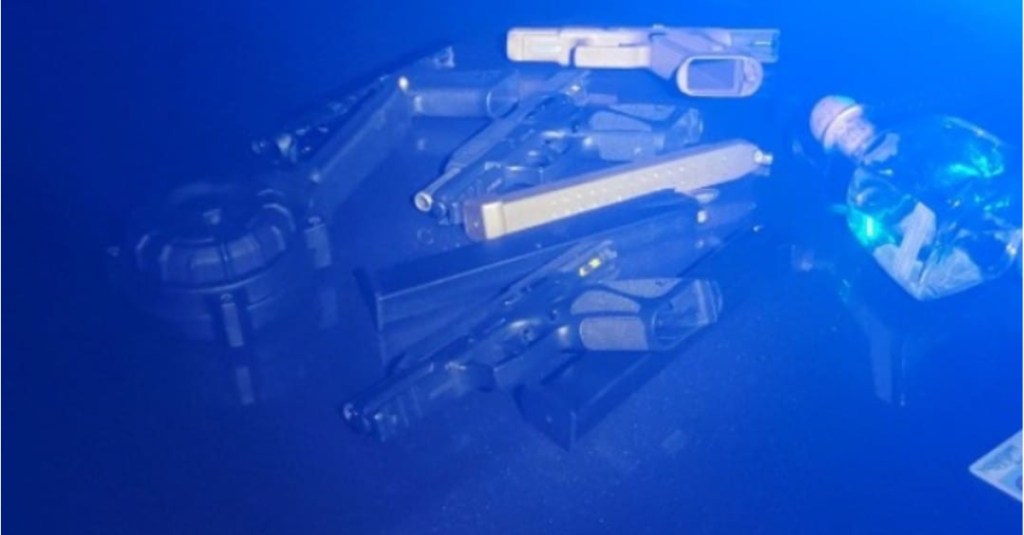 Firearms, marijuana and a bottle of tequila were confiscated from the trunk of a vehicle occupied by Vicksburg teenagers on Saturday night. (Photo by Port Gibson Police Department)

The Port Gibson Police Department and the sheriff’s office, according to reports, had previously received a tip from a Vicksburg resident that a possible shootout was set to take place at a graduation party in Port Gibson.

Claiborne County Sheriff Edward Goods said deputies conducting the checkpoint smelled marijuana in one car they stopped, and deputies along with Port Gibson police officers commenced a search of the vehicle.

According to reports, officers searched the vehicle and recovered several weapons that were located in the trunk of that vehicle under a tire. Goods said two teenagers, both with Vicksburg addresses, are detained in Claiborne County and charged with possession of a stolen firearm.

“The goal is being proactive, not reactive,” Goods said. “I feel like we saved a lot of lives the other night, in being able to keep those guns off the street.”

Goods added that one of the confiscated guns was stolen from a Vicksburg resident.

In a Facebook post, the Port Gibson Police Department said officers later responded to a fight at the graduation party in question. Goods clarified that the fight was between a group of females and no gunshots were reported in that incident.

VOLUNTEER OF THE WEEK: Monica Hicks enjoys helping the…