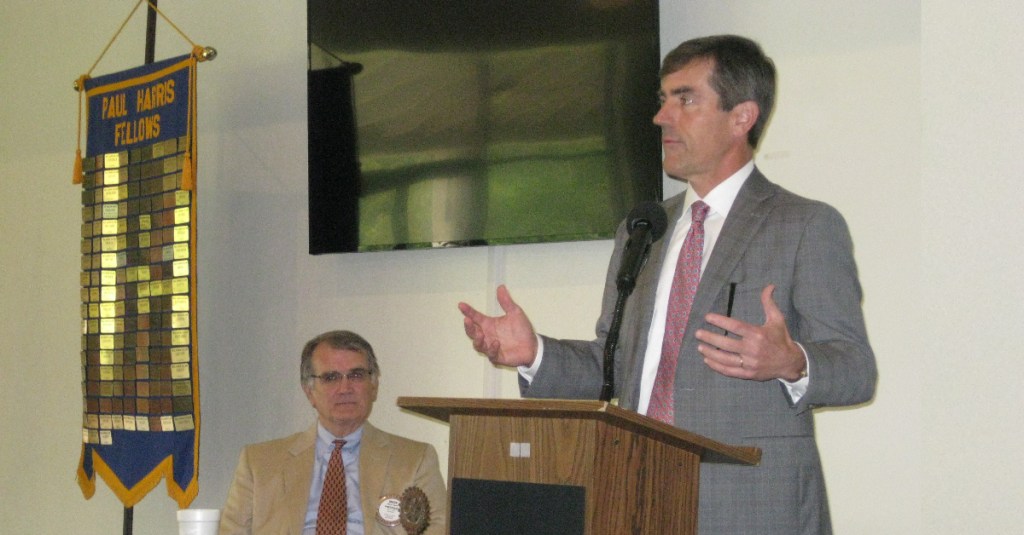 State Sen. Briggs Hopson III, of Vicksburg, spoke at a Vicksburg Rotary Club meeting on May 5. (Photo by John Surratt | The Vicksburg Post)

“Tremendously tough but a tremendously good session; more so than I’ve had in my entire career.”

That’s how State Sen. Briggs Hopson III, R-Vicksburg, characterized the recent session of the Mississippi Legislature, which tackled a series of major issues including medical marijuana, the disposition of more than $1 billion in American Recovery Plan Act funds, a major teacher pay raise and a tax cut package.

Hopson is in his fourth term in the Mississippi Senate and has been chairman of the Senate Appropriations Committee for the past three years.

“It’s a great committee to chair because you have a lot of authority and ability to do things in the Legislature for the state,” he said.

The downside, he said, “Is, that you lose track of the other bills. You’re so locked in on the budget- making sure you get the financial picture right – sometimes don’t have the time to get the details of other bills; it’s frustrating.”

This session, he said involved a number of financial issues, including ARPA and other funds.

“ARPA alone is enough for a full committee and chair,” he said.

Looking at the session, Hopson said the first bill the Legislature passed was the medical marijuana bill, which did not move as quickly as some may have hoped.

“A lot of people thought that was going to pass as soon as we walked in the door, lickety-split, but I knew there were going to be difficulties because there were a lot of things in there that were different,” he said, and various portions of the bill concerned different legislators.

“There were a lot of layers to that and I knew it wouldn’t be easy because I knew there were some layers that came about and you had to get all these little pieces working together to get something out,” Hopson added. “It was a long, convoluted bill with a lot in it and I think the issue you’re seeing now is whether the cities and counties are going to opt-in, opt-out.”

Vicksburg and Warren County have opted into the medical marijuana program, city and county officials said.

About $750 million in ARPA funds will go to cities and counties and rural water associations for infrastructure and water and sewer projects, with $32 million going toward nurse training and a new nursing school at the University of Mississippi Medical Center. The Legislature also included $12 million for additional intensive care unit beds.

The Legislature also approved a tax relief bill that will eliminate the 4-percent tax on income from $5,000 to $10,000 starting in 2023 and gradually move to a flat tax for the state. Eventually, Hopson said, Mississippi will have the lowest income tax in the country.

“One of the biggest pieces of legislation we did was the teacher pay raise,” Hopson said. “This was an enormous step.”

“This is a one-time huge hit for teachers in Mississippi; the average teacher pay raise will be $5,140.”

The Legislature also approved $40 million in building funds for public school buildings and a $1 million interest-free loan for schools that can be paid off in seven years.

Legislators also took steps to improve broadband and Internet service in the state.

Pointing out that many children come home from school with laptop computers to do school work, Hopson said, “We need to make sure there are no gaps in broadband and internet coverage around the state.

“This is hard for children to learn if they don’t have access to the Internet; if they can’t access their school work, if they can’t get to their program from their teacher, they’re not going to learn,” he said.

Concerning other issues, Hopson said the state is in line to get an additional $1 billion in federal infrastructure funds.

He said the Legislature put $100 million into the Mississippi Department of Transportation’s Emergency Road and Bridge Fund, $45 million for highway maintenance projects and $35 million into capacity projects.