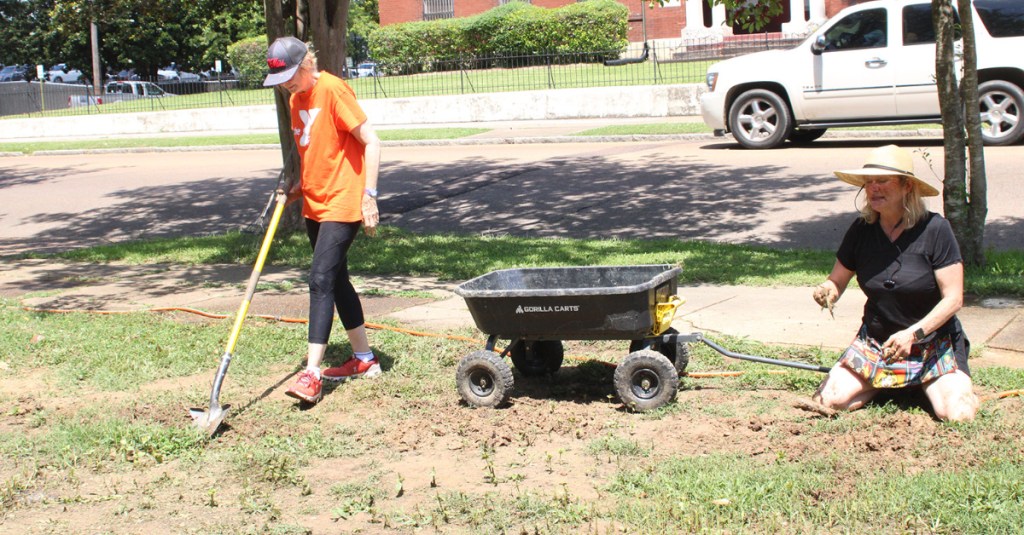 Joyce Ferris, kneeling, and Peggy Gouras work to prepare a flower bed that was damaged by a lawnmower. Ferris has planted two zinnia beds to help provide a colorful attraction for the community. (Photo by John Surratt | The Vicksburg Post)

Ferris has planted two beds of zinnias on Cherry Street on property owned by friends Jimmy and Peggy Gouras.

Zinnias are colorful flowers known as annuals, which means that during their growing season, they will produce flowers and seeds, but the original plant will not return. They produce colorful flowers with erect stems that are good for cutting and can attract butterflies.

“We live out in the country and we have zinnias; I’ve been planting zinnias for years,” Ferris said. “I’ve seen public zinnia gardens before; there’s one in Ridgeland. I thought it would be so nice if Vicksburg had one — something like a public cutting garden. It’s something for the community to enjoy.”

She said she planted an experimental garden on a property she and her husband, Dr. Gene Ferris, own near Anchuca.

“I threw some in the dirt just to see,” she said. “And one thing led to another.”

That led to the garden on the Gourases’ Cherry Street property across from the Warren County Jail. Ferris planted two patches of flowers in late April that were almost ready to bloom when one patch fell victim to a lawnmower.

“It was an accident,” Ferris said Wednesday as she and Peggy Gouras prepared the ground to plant new seeds by removing dead plants and weeds and spreading soil and Epsom salts.

She looked over at the other bed of plants.

“They are getting ready to flower,” Ferris said. “Some of these plants may survive (the mowing); they look strong,” she added as she looked at the bed.

And she is looking beyond reviving the damaged bed.

“I didn’t know the property extended all the way to the corner (on China Street); next year, I might go the whole length,” she said.