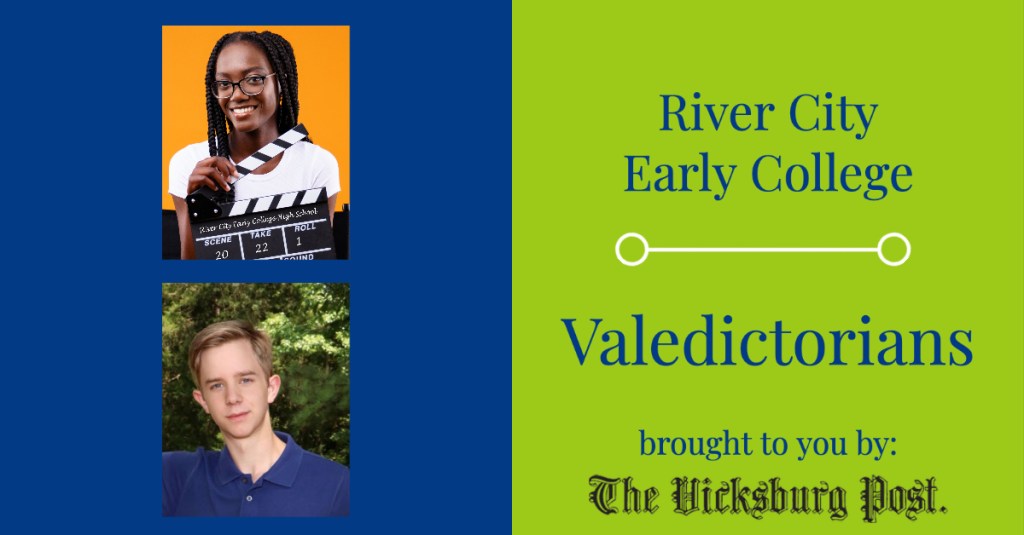 Two students in the 2022 class of River City Early College High School shared the honor of being selected as top in their class.

Caleb Whitney and Taylor Gabrielle O’Leary were both named the school’s valedictorians, each earning a 5.012 GPA.

Whitney, who is the son of Chandler and Alison Whitney said he was “surprised and glad” when hearing the news.

“When I learned that I was my class valedictorian, although I didn’t show it on my face, I was quite shocked,” O’Leary said.

“Going to a school named by some as ‘The Smart Kid School,’ I never expected myself to be ‘the smartest,’” she said.

RCEC is an academic program that was implemented by the Vicksburg Warren School District five years ago. Not only does the school allow students to earn their high school diploma, but they also have the opportunity to earn an associate’s degree from Hinds Community College.

While at RCEC, Whitney was a member of the Key Club and Chess Club. He is also an Eagle Scout, a Hinds President Scholar and was inducted into Phi Theta Kappa.

O’Leary was a member of the National Honor Society, Key Club and the Warren Central High School Track and Field Team.

Whitney said he had not set a goal of becoming valedictorian but was appreciative of those who helped him succeed.

“I would like to thank my amazing teachers and my friends for helping me achieve this honor,” he said.

Like Whitney, O’Leary said, she was not striving for the top spot, but was aiming to graduate in the top 10 percent of her class.

“I never had valedictorian in mind,” O’Leary said, but on achieving the recognition, she said she credited her mother.

O’Leary has plans to attend Alcorn State University and major in Agriculture and Life Sciences.

“I aspire to become a veterinarian and own a veterinary clinic one day,” she said.