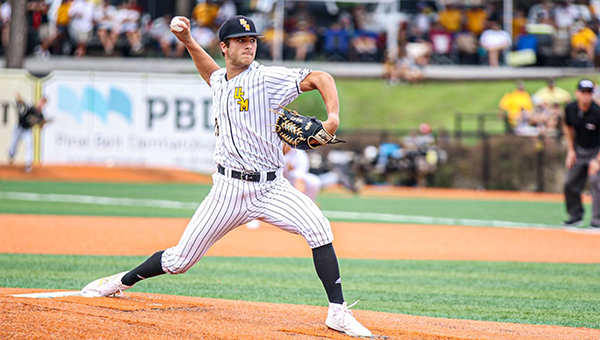 HATTIESBURG — On a day when its offense was not in top form, Southern Miss pitcher Tanner Hall picked up the slack.

The sophomore right-hander limited Army to four hits over eight shutout innings to lead Southern Miss to a 2-0 victory in the opener of the NCAA Tournament’s Hattiesburg Regional at Pete Taylor Park.

Hall (9-2) retired the first 11 batters, which included six consecutive strikeouts at one point, en route to leading the Golden Eagles to their eighth shutout of the season. The Conference USA Pitcher of the Year also retired the final seven batters he faced and finished with nine strikeouts. He only walked one batter.

Landon Harper pitched a scoreless ninth inning for his 12th save of the season.

The dominant pitching performance carried the weight for the Golden Eagles as their powerful lineup missed a number of opportunities to break the game open.

Southern Miss stranded five runners in scoring position in the first four innings, and seven total. It left the bases loaded in the fourth inning before finally breaking through in the bottom of the fifth.

With one out, Reece Ewing walked and scored from first on Christopher Sargent’s double off the top of the left field wall.

Southern Miss added its other run one inning later. Gabe Montenegro, who broke the school record for singles (239) with a pair in the contest, opened the inning with one to right.

After a sacrifice bunt and strikeout, Dustin Dickerson’s grounder to short was thrown low to first. Army first baseman Ross Friedrick could not handle it, and Montenegro alertly hustled home and slid in just ahead of the tag for a 2-0 lead.

Army starter Connelly Early kept the Golden Eagles off kilter for much of the game. He gave up both runs, one earned, on seven hits and four walks while dancing around trouble for most of his outing. He finished with eight strikeouts over six innings.

Southern Miss (44-16) advanced to play the winner of the other first-round regional game between Kennesaw State and LSU Saturday at 6 p.m.

The Kennesaw State-LSU loser will play Army in an elimination game Saturday at 1 p.m. Both regional games will be streamed on ESPN+.