HERO OF THE WEEK: Dr. Paul Mlakar strives for Duty, Honor and Country 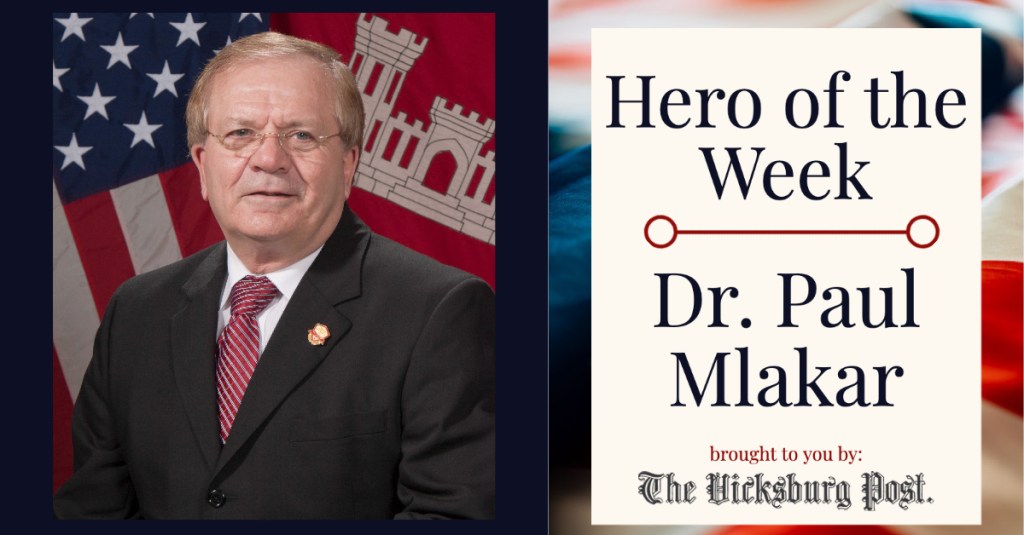 This week’s Vicksburg Post Hero of the Week is Dr. Paul Mlakar, who retired as a Captain in the United States Army.

Following graduation from West Point in 1966, Mlakar served as an officer in the U.S. Army Corps of Engineers. In 1974, he resigned his commission to become a civilian employee of what is now the U.S. Army Engineer Research and Development Center, also known as ERDC. He has been an Engineer Emeritus with this organization since 2015.

(I was an) Engineer officer.

My military service after graduation from West Point included the following assignments:

Starting in 1968 until 1969, I was a Company Commander in Quang Tri, Vietnam, and an Engineer Group Staff in Phu Bai, Vietnam. During 1969, I was an Omaha Engineer District in Denver, Colo. and from 1970 until 1973 I was part of the Engineering Faculty in West Point, N.Y. Then, from 1973 to 1974, I worked at the Waterways Experiment Station in Vicksburg.

The education, training and inspiration I received as a West Point Cadet prepared me very well for my service in the Army.

I strive to live by the Academy motto of Duty, Honor, Country.

What are some things you remember most about your deployment?

During my time as a Company Commander, Company A of the 14th Engineer Battalion was the northernmost Army Engineer Company in Vietnam. Notably, these heroic combat engineers constructed a remote road just below the Demilitarized Zone from the provincial capital of Quang Tri to the seaport of Cua Viet. This required the innovative stabilization of the sandy terrain using Portland cement. This road subsequently facilitated the withdrawal of U.S. forces from Vietnam.

While in the Engineer Group Staff, late one afternoon a typhoon forced a helicopter carrying two Corps of Engineers General Officers to land at an unoccupied firebase between Phu Bai and Danang. I led a hastily assembled convoy of our heroic clerks and cooks to retrieve the passengers. Fortunately, we reacted before the enemy and returned safely to Phu Bai without further incident.