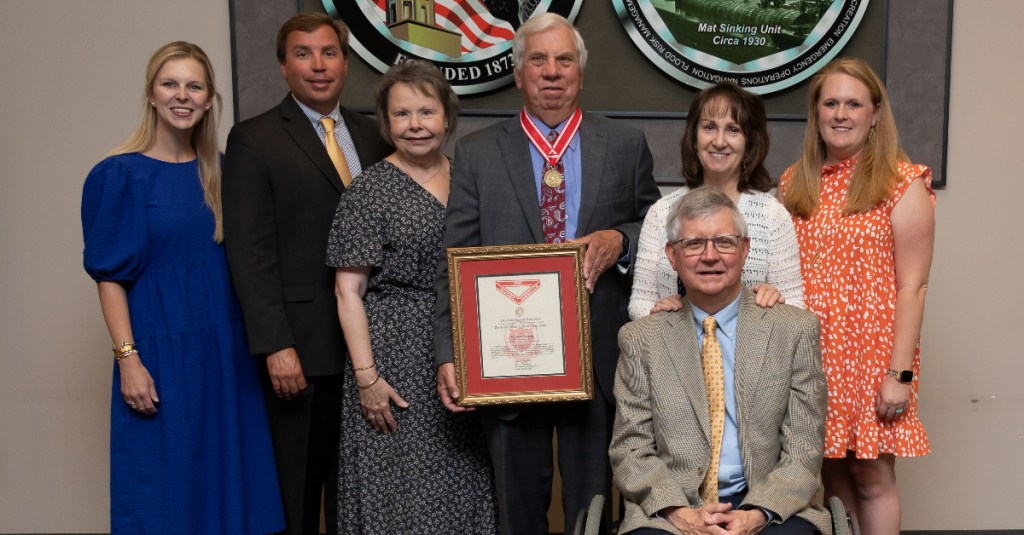 Kent Parrish, a recently retired engineer with the U.S. Army Corps of Engineers Vicksburg District, received the Bronze Order of the de Fleury Medal for his leadership to the district throughout his 38-year career.

The award was presented Thursday at the district’s annual Engineers Day awards ceremony. The honor recognized Parrish’s service to the United States Engineer Regiment as it supports the Army to assure mobility, enhance protection, enable expeditionary logistics and build capacity to provide commanders with freedom of action.

Parrish, who retired in December 2021, began his career with the district in 1983 as a study manager/planner on projects like the Slidell/Pearlington Flood Control Study, Upper Steele Bayou, Upper Yazoo Projects, and Yazoo Backwater Reformulation studies.

He was also involved in preparing Supplement 1 to the 1976 Mississippi River Levees Environmental Impact Statement for not only the Vicksburg District but the USACE New Orleans and Memphis districts as well.

He was responsible for levees being upgraded, repaired, relocated, setback and built, and his efforts helped protect the well-being of thousands of individuals who lived in their vicinity.

The presentation of the de Fleury began in 1989 by the Engineer Regiment when the Engineer School moved from Fort Belvoir, Va., to Fort Leonard Wood, Mo., but its full history can be traced back to the 18th century.

The medal was first cast in 1779 in honor of French engineer Lt. Col. Francois Louis Tesseidre de Fleury, who commanded one of four engineer regiments during the Revolutionary War and was noted for his valor after recapturing Stony Point, N. Y., from British forces earlier that same year, which lifted morale and helped prove the American Colonies were a fighting force.