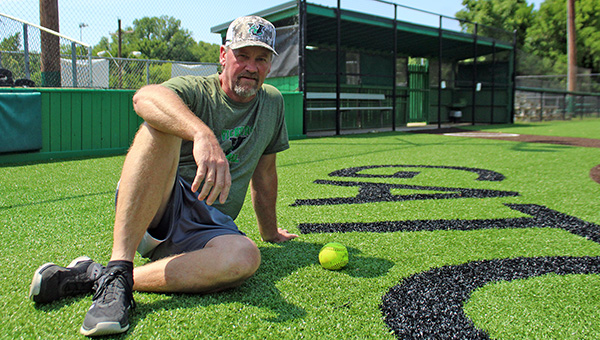 Vicksburg High's Brian Ellis is the 2022 Vicksburg Post softball Coach of the Year. Ellis led the Missy Gators to the third round of the MHSAA Class 5A playoffs for the first time in program history, and won the Post's award for the second season in a row. (Ernest Bowker/The Vicksburg Post)

It was the middle of March, about halfway through the high school softball season, and the Vicksburg Missy Gators’ big dreams were not materializing.

They’d lost 10 of their first 11 games. The lineup wasn’t producing and pitchers were struggling. Coach Brian Ellis agonized over what to do to right the sinking ship and finally came to a stunning conclusion.

The best way to fix it was to do nothing.

“We were frustrated. We really thought that we’d be scoring a lot of runs and we weren’t doing that. I made the comment to them that we can’t overthink this thing,” Ellis said. “If we start overthinking it we’re going to be adding too much, so we somehow have to figure out a way to still work and make sure they’re having fun.”

Ellis recognized the bad start for what it was — a slump, and not a full-blown implosion. He stayed the course and stuck with the plan, and his players soon pulled out of it.

The Missy Gators won six of their next seven games and 11 of their last 16. They won the Region 4-5A championship and a playoff series to reach the third round of the MHSAA Class 5A playoffs for the first time.

In the end, it turned out to be a pretty good season — one of the best in the program’s history, in fact — as Ellis engineered a turnaround that netted him the 2022 Vicksburg Post softball Coach of the Year award.

Ellis won the award for the second year in a row and third time in nine seasons overall at VHS. He also won it in 2016.

“Humble, happy at the same time. When you’re recognized for something like that it’s obviously good when people see what you’re doing and recognize you for that,” Ellis said of winning the award. “It also tells me that my kids and my assistant coaches have been doing the right thing and we’re on the right track.”

For a while, it seemed the Missy Gators were on the wrong track.

With a number of returning starters from the 2021 team that lost to New Hope in the second round of the playoffs — after having an apparent series-clinching victory reversed by the MHSAA because of a rules violation — hopes were high for 2022.

Then came the slow start. Vicksburg lost its first seven games and 10 of the first 11. It scored a total of 12 runs in nine of the 10 losses.

Then the Missy Gators roughed up hapless Jim Hill 19-0 on March 24 and started to turn things around. Wins over Brookhaven and Cleveland Central followed in quick succession and, suddenly, the bad vibes from the first month of the season vanished.

On the way home from the 10-8 win over Cleveland Central on March 31, Ellis said he could tell that staying the course was paying off.

“The one thing I noticed about the way the girls played, we’re good. We’re on the right track. We’re going to start opening some things up,” he said. “There was a lot of stress and noise, and we came out and played a pretty decent team and came out ahead. That was one of the big turning points.”

The Missy Gators had a few bumps in the road in April, but still won their region — Jim Hill was the only other team in it — to earn a first-round bye in the playoffs. They outscored Ridgeland 40-15 in a second-round sweep before running into New Hope for the second year in a row.

New Hope beat Vicksburg 6-0 and 10-2 for a two-game sweep that Ellis did not hide his disappointment over.

Although they came up a bit short of where they wanted to be, it was hard to deny what the Missy Gators did accomplish. They salvaged a potential trainwreck of a season to do something the program had never done before.

The Missy Gators should be able to keep winning and building something great in 2023, as well. Outfielder Kellisia Walker is the only senior starter who is graduating.

“Any time you lose somebody that’s a four- or five-year starter it makes it tough,” Ellis said. “But I feel like now our program has gotten to that point where we’ve got somebody that can go in and replace her. It’s not like we’re having to teach somebody totally different. We’ve got somebody who can go.”

Vicksburg has now won back-to-back region championships and a second-round playoff series against a quality Ridgeland team. That kind of sustained success, Ellis said, is starting to make the program respected around the state.

Of all their accomplishments on his watch, it’s the one he’s most proud of.

“We’ve got coaches from up north that we don’t play a lot and they’re sending texts and people know Vicksburg High School softball,” Ellis said. “That’s probably the greatest feeling is that people recognize us now. People know they can’t just show up. They have to come and play us. And that’s what I like.”