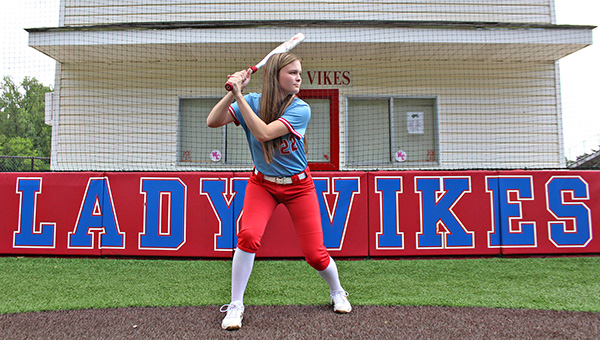 When she looks back on her production in the 2021 season, it’s obvious Warren Central’s Jenn Smith wasn’t terribly happy with it. Her numbers weren’t terrible for a freshman — a .273 batting average, nine RBIs, 18 runs scored — but she knew she could do better.

So over the course of the next year she set out to improve her skills. She put in extra work in the batting cage. She arrived early and stayed late at practice, and took some private lessons.

And, when she looks back at her 2022 season, Smith is a whole lot happier. She raised her average 142 points. She tripled her RBI total and doubled her hit total. She went from hanging on to a spot in Warren Central’s starting lineup to the best player in Warren County.

Smith, the Lady Vikes’ left fielder, is the 2022 Vicksburg Post softball Player of the Year.

“It feels better than last year,” Smith said with a smile. “I put in a lot more work in the offseason this year than I did last year. And hitting at home and different practices helped, too.”

Smith’s hallmark this season was her consistency. She started with a six-game hitting streak and wound up hitting safely in 23 of 28 games. She finished with a .415 batting average that led Warren County, and was also a top run producer for the Lady Vikes with 27 RBIs and 23 runs scored. She had 34 hits after getting 15 in 20 games in 2021.

“Just really consistent putting the bat on the ball,” Warren Central coach Dana McGivney said. “You don’t have to hit home runs. If you can consistently hit the ball hard and put it in play, then good things are going to happen and that’s what she got us.”

Smith said things started to click for her early, after she hit a home run in an 8-5 win over Madison Central on Feb. 22.

The home run was Smith’s only one of the season, but she kept working and kept driving the Lady Vikes forward. They wound up with an 18-11 record and reached the MHSAA Class 6A playoffs.

On the few occasions when she didn’t get a hit, Smith said she tried to figure out why.

“I at least tried to get one hit every game, and if I couldn’t I would just replay the hits and watch the videos and try to adjust and do better the next game,” she said.

McGivney was impressed with the extra effort Smith put in to improve her game, and noted that it went well beyond the couple of hours in practice each day in the spring.

Smith still has a lot of softball ahead of her — two more high school seasons, and countless travel ball games during the next couple of summers. She said her goal is to keep getting better and better that whole time.

“I just want to stay consistent with my batting and hope we get further and further every year,” Smith said.