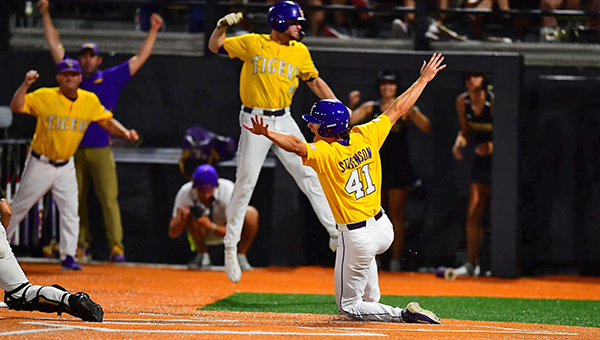 LSU's Josh Stevenson (41) celebrates after scoring the game-winning run in the 10th inning against Southern Miss on Saturday. LSU scored four runs in the ninth inning and another in the 10th to win 7-6 in the NCAA Tournament's Hattiesburg Regional. (LSU Athletics)

HATTIESBURG — LSU couldn’t conjure up more eighth-inning magic on Saturday. It saved it for a little bit later.

The Tigers overcame a huge late-inning deficit for the second night in a row, scoring four runs in the bottom of the ninth to tie the game and then walking it off in the 10th on Josh Pearson’s RBI grounder to stun Southern Miss 7-6 in the NCAA Tournament’s Hattiesburg Regionl.

LSU (40-20) scored 10 runs in the eighth inning of its opener to beat Kennesaw State, after trailing by seven runs. It was behind 6-2 entering the ninth against Southern Miss (44-17).

“We said it yesterday and we have this saying that there’s no clock in baseball. No team has probably exhibited that better than our team here in the last two days,” LSU coach Jay Johnson said.

LSU remained undefeated in the regional and advanced to the championship game Sunday at 6 p.m. at Pete Taylor Park. It will await the winner of an elimination game between Southern Miss and Kennesaw State that starts at 1 p.m.

Both games will be streamed on ESPN+.

Southern Miss will try to pick up the pieces after seeing a seemingly-insurmountable lead evaporate in a matter of moments.

Southern Miss starter Hurston Waldrep dominated the Tigers for six-plus innings. He totaled 11 strikeouts, including six in a row at one point, and left after giving up a two-out double to Dylan Crews in the seventh inning.

Will McGillis, Carson Paetow and Christopher Sargent all homered for the Golden Eagles. Sargent’s solo shot in the top of the eighth inning put them ahead 6-2.

Sargent finished 3-for-4 with the home run and three runs scored. McGillis drove in two runs and scored two.

LSU loaded the bases in the bottom of the eighth, but Southern Miss closer Landon Harper threw one pitch to get out of it with a groundout. In the ninth, he wasn’t as fortunate.

Crews started LSU’s comeback with a towering home run that cleared the scoreboard in left center field. Josh Pearson followed with a two-out single, and Cade Doughty a two-run home run to right field to cut it to 6-5.

Tre’ Morgan then was hit by a pitch that barely brushed his right sleeve. A replay review upheld the hit by pitch call. Pinch-runner Drew Bianco moved up to second on a ball in the dirt, and Jordan Thompson bounced a single up the middle to bring in Bianco with the tying run.

“Obviously we’re very disappointed in the outcome of it. We just couldn’t put them away there in the ninth inning. We played a really good game up until that point,” Berry said. “What (Waldrep) was able to do during the course of his outing was to get punch outs and strike outs. We weren’t able to do that later in the game and they were able to foul pitches off to extend at bats. Credit to LSU for that.”

Southern Miss went down quietly in the top of the 10th, and then LSU wasted little time putting together its winning rally in the bottom half against reliever Garrett Ramsey.

Tyler McManus led off with a single, Josh Stevenson was hit by a pitch — on another play that was reviewed and upheld — and Crews drew a four-pitch walk to load the bases and chase Ramsey from the game. Ramsey was replaced by Tyler Stuart.

Josh Berry followed with a grounder up the middle that Southern Miss shortstop Dustin Dickerson cut off and threw to the plate to get McManus for the first out of the inning.

The next batter, Pearson, hit another chopper up the middle to Dickerson. This one was a little higher and slower, though, and Stevenson beat the shortstop’s throw to to the plate to send the Tigers into a victorious frenzy.

“Coach just told me to stay in my approach and do what I’ve been doing all year,” said Pearson, who was 2-for-6 with one RBI and one run scored. “I was just trying to put a ball through the infield going up there or hit a sac fly in the outfield. It got the job done and that’s all I was trying to do.”