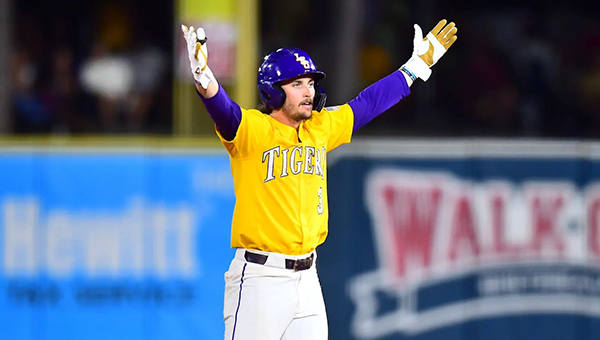 LSU's Dylan Crews celebrates after hitting a go-ahead double against Kennesaw State Friday in the NCAA Tournament's Hattiesburg Regional. LSU scored 10 runs in the bottom of the eighth inning to win 14-11. (LSU Athletics)

HATTIESBURG — In one incredible inning, the LSU Tigers went from down and out to on top of the world.

LSU exploded for 10 runs in the bottom of the eighth inning Friday night to turn a seven-run deficit into a 14-11 victory over Kennesaw State in the opening game of the NCAA Tournament’s Hattiesburg Regional.

LSU sent eight men to the plate before recording an out, and 14 batters total. Dylan Crews hit a two-run double to put the Tigers ahead and Josh Pearson added a two-run single for some insurance.

Tre’ Morgan also hit a two-run single that pulled the Tigers within two runs. They entered the eighth inning trailing 11-4 and exited leading 14-11.

“Honestly I’m just still in shock of what just happened,” said Crews, who was 2-for-5 with three RBIs and two runs scored. “When you’re down by that much and all of a sudden you’re just able to string hits together and then look at the scoreboard and you’re two and one runs away from tying the game. It changed for me when Tre’ (Morgan) got that single up the middle. I feel like it really gave us a chance to go out and finish it.”

Kennesaw State (35-27) will face Army (31-24) in an elimination game at 1 p.m. Saturday. All of the Hattiesburg Regional games will be streamed on ESPN+.

LSU ace Ma’Khail Hilliard did not make it out of the third inning against Kennesaw State. He allowed five runs in 2 2/3 innings, and then reliever Riley Cooper gave up six more.

Another reliever, Devin Fontenot, settled things down with 3 1/3 innings of shutout ball. Fontenot struck out six batters, walked one and gave up two hits.

Paul Gervase closed it out in the ninth for his fifth save of the season.

“We don’t win the game if Devin doesn’t come in and settle the
game. It’s the best performance out of him this year when we really, really really needed that,” LSU coach Jay Johnson said.

Tyler Simon hit a two-run home run for Kennsaw State and finished with four RBIs. The Owls scored four runs in the third inning, two in the fifth and four more in the sixth to take what seemed to be a secure 11-4 lead.

It was not secure.

A walk, a hit batter, and a single by Jacob Berry were followed by three consecutive run-scoring hits by LSU in the bottom of the eighth inning. Morgan’s two-run single came next, then another single and a walk.

A fielder’s choice brought in a run but finally gave Kennesaw State an out. Josh Stevenson, who led off the inning as a pinch-hitter, then walked for the second time and Crews ripped his double to left center to put LSU ahead 12-11.

After an intentional walk to Berry, Pearson hit a two-run single to make it 14-11.

Pearson finished 3-for-4 with three RBIs and two runs scored. He was one of five Tigers with multiple hits and multiple RBIs. LSU had 13 hits in the game, and also took advantage of eight walks issued by Kennesaw State’s pitching staff.

“We’ve said this since day one: there’s no clock in baseball. With the type of offense we have … we can do stuff like that,” Johnson said. “Just two weeks ago at Vanderbilt we were down 6-0 and ended up winning 21-10. The care level is there and the belief level is there for these guys and we have the ability to do it. Great performance, but we just need to turn the page and get ready for tomorrow.”