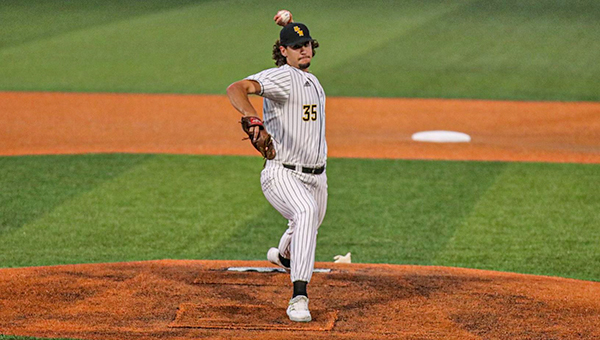 HATTIESBURG — It was a beautiful, clear night in Hattiesburg, but a Storm blew Southern Miss right on into tomorrow.

Seldom-used reliever Justin Storm pitched five innings of shutout ball, and Southern Miss scored three runs in the sixth inning to take the lead for good as it beat LSU 8-4 in the NCAA Tournament’s Hattiesburg Regional on Sunday.

Southern Miss (46-17) won two elimination games Sunday — it beat Kennesaw State 4-3 in 10 innings earlier in the day, on a walk-off RBI single by Christopher Sargent — to set up a winner-take-all showdown with LSU on Monday.

The Golden Eagles and Tigers will play at 3 p.m. at Pete Taylor Park, with the winner advancing to the super regional round next week against either Ole Miss or Arizona.

Monday’s game will be televised on ESPNU. LSU has been designated as the home team.

Southern Miss avenged a loss to LSU (40-21) a day earlier in which it blew a four-run lead in the ninth inning, and ended a 10-game losing streak to the Tigers that dated to 2007. It had its bullpen to thank.

USM starter Matthew Adams was roughed up for three runs in two-plus innings, and Drew Boyd gave up another run in the third inning. Boyd faced four batters and all of them reached base. He gave way to Isaiah Rhodes, who got out of the jam and pitched another scoreless inning before Storm took over.

Storm, a sophomore left-hander who had appeared in only 11 games this season, shut down LSU’s red-hot lineup for the rest of the game. He allowed two hits and one walk, and struck out seven in his longest outing of the season. He retired 15 of the 19 batters he faced.

Before Sunday’s game, Storm had thrown a total of 9 2/3 innings this season. None of his outings had lasted more than 1 2/3 innings.

Southern Miss’ hitters kept pace with LSU early and then surged ahead late.

The Golden Eagles scored twice in the second inning to match an early two-spot by LSU, and then twice more in the bottom of the third to tie the game again at 4.

In the sixth, three walks, a wild pitch and a balk helped bring in two runs. An RBI single by Dustin Dickerson brought in a third and left Southern Miss ahead 7-4.

Carson Paetow added a solo home run in the eighth, and LSU had none of the late-inning magic that carried it to wins in its first two regional games.

Storm put two runners on base in both the seventh and ninth innings, but worked out of both jams without any damage to finish the game.

The third of six LSU pitchers, Riley Cooper (4-3), suffered the loss by allowing a run on two hits and two walks with three strikeouts over 2 2/3 innings.