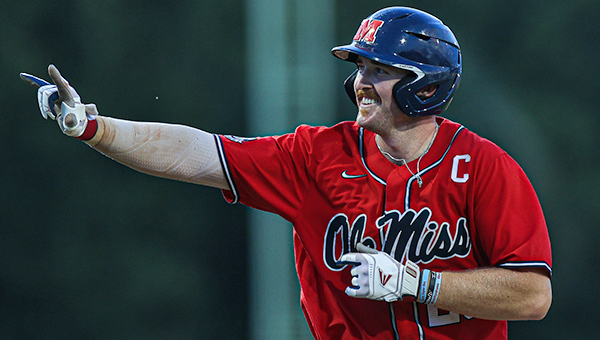 Ole Miss' Tim Elko celebrates after getting a hit Monday against Arizona in the championsho game of the NCAA Tournament's Coral Gables Regional. Elko hit three home runs to power the Rebels to a 22-6 victory. (Ole Miss Athletics via Twitter)

CORAL GABLES, Fla. — Three months ago, Ole Miss was riding high as the No. 1-ranked team in the country. When it mattered most, it finally played like it.

Ole Miss (35-22) went a perfect 3-0 in the regional and advanced to the super regional round for the eighth time. It will head to Hattiesburg to face in-state Southern Miss in a best-of-three series beginning Saturday.
Southern Miss, the No. 11 national seed, beat LSU 8-7 on Monday to win its regional.

“It’s a great moment. It doesn’t matter what rank you are getting into the tournament. we have full belief in ourselves,” Elko said. “This didn’t come as a huge surprise to us, that we were able to play well.”

Excluding the COVID-shortened 2020 season when there was no NCAA Tournament, Ole Miss is in a super regional for the third season in a row. It has not reached the College World Series since 2014, however.

Ole Miss and Southern Miss split two regular-season meetings, with USM winning 10-7 in Pearl on April 5 and Ole Miss taking a 4-1 decision in Hattiesburg on May 11.

“It’s neat. Population of 3 million in our state and there might be 3 million in Miami, and we have two teams here. Tremendous respect for Scott Berry and what he’s done there. They’re as good as any program in the country,” Ole Miss coach Mike Bianco said. “We don’t have a lot of fans show up when we play there on Tuesday, but I think a lot of them will show up this time.”

Ole Miss was the last at-large team selected to the NCAA Tournament field. It was No. 1 in the country in mid-March, then went 16-18 over its last 34 games entering the tournament.

The Rebels put it all together down in South Florida, though. After gutting out close wins over Arizona and Miami in their first two regional games they busted loose in the clincher.

Ole Miss and Arizona (39-25) went back-and-forth early — the Wildcats hit three home runs of their own, including two by Blake Paugh — to leave the score tied 5-5 through four innings.

Then the Rebels batted around in both the fifth and sixth innings to turn a close game into a victory lap. Alderman hit a grand slam in a five-run fifth inning, and they sent 14 batters to the plate while scoring eight runs in the sixth.

Chatagnier and Calvin Harris both hit two-run doubles in the sixth inning, and when the carnage was over Ole Miss had an 18-5 lead.

“I think it’s just the way the cards fell,” Chatagnier said of the offensive outburst. “I don’t want to say it was a surprise or that we were taking Arizona lightly, but we knew we had it in us, for sure.”

The Rebels weren’t quite done after their two big innings.. Elko hit a solo home run in the eighth inning, and Chatagnier hit another two-run double in the ninth. Ole Miss’ 22 runs were a season-high and the most in any game in the school’s postseason history.

Alderman drove in five runs, and Kevin Graham was 3-for-6 with two RBIs and three runs scored.
Chatagnier was 4-for-6 with a home run, two doubles and six RBIs. He finished with 10 RBIs in three regional games.

Elko finished 4-for-4 with five RBIs and six runs scored. His third home run gave him an Ole Miss single-season record 22 for the season. Elko also became the eighth Ole Miss player with three home runs in a game, and had a chance to be the first to hit four when he came to the plate with one out in the top of the ninth inning.

Instead of a home run, however, he hit a single and wound up scoring the Rebels’ 20th run on another single by Alderman.

“I was trying to hit another home run. I wasn’t looking for a single,” Elko said with a laugh. “But I’ll take it.”