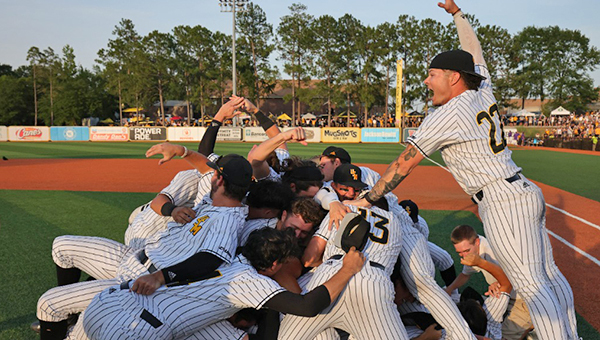 Southern Miss baseball players celebrate after beating LSU 8-7 on Monday to win the NCAA Tournament's Hattiesburg Regional. Southern Miss advanced to the super regional round, where it will face in-state rival Ole Miss for a trip to the College World Series. (Joe Harper/BGNPhoto.com/Southern Miss Athletics)

HATTIESBURG — An epic weekend at Pete Taylor Park ended with an unforgettable victory for the home team.

Danny Lynch hit a go-ahead sacrifice fly in the top of the ninth inning, and Southern Miss vanquished LSU 8-7 on Monday to win the NCAA Tournament’s Hattiesburg Regional.

The Golden Eagles (47-17) advanced to the super regional round for the first time since 2009 and set up another huge series next weekend in Hattiesburg — they’ll play Ole Miss for the right to go to the College World Series.

It’s only the second trip to a super regional in Southern Miss’ history, and the first time it will host one.

“It’s special. This is something we’ve never been able to do and we can check that box now,” said Southern Miss coach Scott Berry, who was an assistant with the 2009 team. “We’ve only been part of one super regional and that was in ‘09 down at Florida. You understand the feeling of this regional, but the feeling of winning a super regional and getting to go to Omaha is even more special.”

LSU (40-22) overcame a seven-run deficit to win its regional opener against Kennesaw State, a four-run deficit to beat Southern Miss on Saturday, and a three-run hole in Monday’s winner-take-all championship game.

The Tigers ran out of gas, though, after Gavin Dugas homered to tie the score at 7 in the bottom of the eighth inning. USM reliever Tyler Stuart retired all four batters he faced, including a strikeout of Jordan Thompson to end it.

Southern Miss had some late-inning magic of its own in this regional. After blowing a 6-2 lead in the ninth inning in its first meeting with LSU on Saturday, it stayed alive with a 10-inning walk-off win vs. Kennesaw State and an 8-4 win vs. LSU in pair of elimination games Sunday.

On Monday, after letting a 7-4 lead slip away, it bounced back in the top of the ninth.

Christopher Sargent led off with a single — his last hit in a 3-for-4 day — and went to third base on another base hit by Slade Wilks. Lynch followed with a high fly ball to left that was caught, and Sargent tagged and scored without a play at the plate to put the Golden Eagles ahead 8-7.

Stuart’s 1-2-3 inning in the ninth made it stand up and sent the Golden Eagles on to the super regional against their in-state rival.

“We beat a very good club two out of three times, and they (LSU) did not go away in every game. I look at us and them as a series when it came down to it,” Berry said.

The super regional will begin Saturday. Southern Miss is seeking its first trip to the College World Series since 2009, and Ole Miss its first since 2014.

Ole Miss and Southern Miss split two regular-season meetings, with USM winning 10-7 in Pearl on April 5 and Ole Miss taking a 4-1 decision in Hattiesburg on May 11.

The super regional is also a rematch from last year’s NCAA Tournament. Southern Miss beat Ole Miss in the 2021 Oxford Regional to force a winner-take-all game, which Ole Miss won 12-9.

“I’ve been a part of a lot of special teams before, but as a head coach I think this one tops it,” Berry said. “They just stayed the course. I think it carried over from the Oxford Regional last year when we battled to that championship game and fell short. The guys who returned from that team didn’t want to have that taste in their mouth again.”

Rebels wipe out Arizona, advance to super regional against…