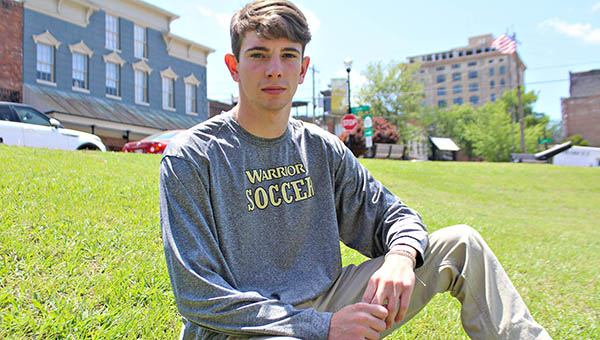 Warren Central soccer player Riley Lampkin has accepted a scholarship offer from East Central Community College. Lampkin will work as a team manager in the fall as he recovers from a knee injury, then transition to the active roster in spring 2023. (Ernest Bowker/The Vicksburg Post)

Over the next few months, Riley Lampkin will learn a lot of new things as he transitions from high school to college soccer.

Advanced tactics. Formations. How to paint lines on the field and do laundry on an industrial scale.

The recent Warren Central graduate earned a soccer scholarship to East Central Community College, but with a twist. He’ll spend his first season working as a team manager while he recovers from a knee injury, with a plan to join the active roster in 2023.

It’s an unusual path to the next level, but it’s one Lampkin has embraced following the devastating injury that ended his high school career.

“It means the world. If I’m not going to be able to play, that’s OK. I’m still going to be on that team and around that group of guys. That’s sort of what I wanted in general,” Lampkin said. “I was begging people for a walk-on offer or a manager’s scholarship after this, so I was very thankful and grateful of it.”

Heading into his senior season, Lampkin was a hot prospect among Mississippi’s junior college programs. He was a three-year starter on Warren Central’s defensive side and had several scholarship offers.

That all changed just before Christmas.

On Dec. 14, in a region game against Northwest Rankin, Lampkin and an opponent were both going for a loose ball in the open field. Lampkin slid, and the Northwest Rankin player kicked his knee and “destroyed it.”

“I can usually take a lick. Then I went back out there and couldn’t stand on it and I knew it was bad,” Lampkin said.

Lampkin knew right away he was injured, but didn’t know exactly how bad for several more days. Emergency room X-Rays only showed a bone contusion, so he iced his knee and took Tylenol for the pain. He returned to practice and even played a game four days later.

“After that game it felt sore. It didn’t pop out of place or anything, so it was like, ‘OK, it’ll be all right,’” he said. “It was torn, cracked, bone contusion. We just didn’t know any of that until we went to an orthopedic surgeon.”

Finally, about a week after he was injured, Lampkin got an MRI at Capital Orthopedic in Jackson and got the full picture. He had a torn ACL and a cracked femur, two serious injuries that would take a full year to recover from. His high school career, and possibly his soccer career as a whole, was over.

“It hit like a ton of bricks,” Lampkin said. “I had my entire life planned out around soccer. Right before that I went on a D-3 visit to the (Mississippi University for Women). I had stuff going for me and then, boom. We told every single coach that was interested and we haven’t heard from one of them since.”

As soon as word of his inury got out, the coaches who had been recruiting Lampkin backed off — all except one who hadn’t been there to begin with.

Lampkin’s coaches with his club team, Brilla, worked their contacts to try and find him an offer. East Central’s Zach Paschal had not been recruiting Lampkin at all, but stepped into the void.

“The people at Brilla really went out of their way to help find him a place,” Lampkin’s father, Randy, said. “East Central was not on his radar at any point until this happened.”

Riley Lampkin was helping coach his Brilla team at a tournament when he met Paschal for the first time and, he said, “We just sort of hit it off.”

Paschal was willing to give Lampkin a chance. Lampkin was more than willing to take it.

“It’s respect to him. He just said everybody deserves a second chance,” Riley Lampkin said. “He’s torn his ACL twice and knows how it feels to think your future with the sport is over. He doesn’t necessarily want to give that up to somebody that’s probably deserving of it.”

The second chance Lampkin was offered was a mash-up of two offers. He’ll be on a manager’s scholarship for the fall 2022 semester while he continues to rehab his injury. He expects to be medically cleared late this year, and then will transition to East Central’s active roster in the spring of 2023. He’ll take a redshirt year or apply for a medical redshirt to preserve a year of eligibility.

The pathway to playing again will require twice as much work. In addition to his duties as a manager — behind-the-scenes tasks like painting the field, breaking down film and handling uniforms and equipment — Lampkin said he’ll also have to study and observe the team’s practices in order to hit the ground running as a player next year.

“The hardest part is going to be in the fall. I’ve got to learn everything in about two weeks and then keep that and apply that,” he said. “I’m going to be a manager, but I’ve also got to balance being a player with that as well. I’ve got to pay attention and listen to what (Paschal is) saying so when I get back out there I know what’s said and coached. It’s a lot to take in, but I’ll work it out.”

He’ll also have to make sure he’s ready to take full advantage of his opportunity next spring.

Lampkin said he’s lost 10 pounds from not being able to work out for the past six months, and is still worried about running. He won’t be able to lift weights for a few more months. The most strenuous thing he’s done, he said, was weedeating a hill at the family’s home.

Trying to rein in his competitive nature and let the recovery process play out, he admitted, has been difficult.

“It’s extremely tedious for me. But I’ve got to understand what the doctor is saying,” he said. “It takes three months for that new ACL tendon to grow roots into the bone and that’s where I’m at, so if I do something stupid I’m starting off at square one. I want to go running. I want to go back to what I was doing. But I know I can’t. It’s a leash.”

He was excited, though, that there is a goal to strive for as he starts down a path he never could have envisioned a few months ago.

“I had countless coaches come and wanting me to play, and I tore my ACL and broke my leg and that was it. It is special to have a coach want you to come play and get healthy, and sees that you’re a good enough person to do that,” Lampkin said.

“I didn’t know it was an opportunity until he said, ‘Hey, I have this opening. Would you like to do it?’” Lampkin added. “It’s paying for school, so why not? I’m going to get school paid for and be able to play in the spring, so I don’t really care how it happens.”