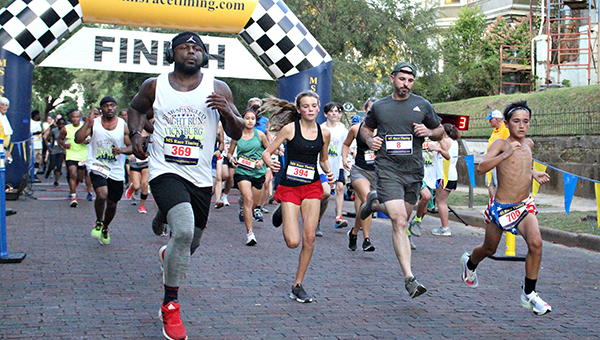 Runners and walkers take off from the starting line to begin the Star Spangled Night Run 5K in downtown Vicksburg in June 2021. This year's Night Run 5K is scheduled for June 18. (File/The Vicksburg Post)

One of Vicksburg’s signature summer events is set to light up the night once again.

The Fifth Annual Star Spangled Night Run 5K is scheduled for Saturday, June 18. The race will begin at 8 p.m. in front of the Southern Cultural Heritage Center on Crawford Street and end in the same spot after following a course through downtown Vicksburg.

The race is the only one in Mississippi to be run in the evening rather than the traditional morning time slot, which gives it a unique niche on the state’s running calendar.

“There’s some other signature races that you think of when you think of summer, like the July 4 Watermelon Classic that’s been around forever. But that’s an 8 a.m. race. I think we’ve grabbed that night run spot,” said Stacey Mahoney, the Night Run’s race director and the director of the Southern Cultural Heritage Foundation.

The Star Spangled Night Run is a fundraiser for the SCHF. The SCHF is a non-profit organization that offers a variety of free community programs, concerts, lectures and workshops throughout the year.

“This is a fundraiser for us and we only do a couple of actual fundraisers. Most of our events are community events,” Mahoney said. “These fundraisers pump money into our operations so we can keep offering other events for free.”

The Night Run started in 2018. It was the first major event in Vicksburg after the onset of the COVID-19 pandemic in 2020 and is celebrating its fifth anniversary in 2022.

The race typically draws around 150 runners and walkers, with its nighttime party theme serving as an attraction. Glow sticks and necklaces are included in each participant’s race package, face painters offer their services beforehand, and an after-party in the Southern Cultural Heritage Center follows the race.

“We’re excited to have made it through that tough time,” Mahoney said. “We do feel like this is a fun and different race because it’s the only one around that is at night. We think it’s fun with the glow in the dark stuff. It’s got a different atmosphere. It’s a fun one.”

The fun this year is set for June 18. Raceday registration will begin at 6:30 p.m. at the Southern Cultural Heritage Center and the race starts at 8.

The registration fee is $35 for adults, and $20 for children under 12. The entry fee includes admission to the after-party.

Mahoney said volunteers who work the race will get free admission to the after-party. Anyone interested in volunteering can contact her at 601-631-2997 or via email at info@southernculture.org.

“It’s more than just refreshments after a race. There’s music, there’s free food, beer and all of that good stuff,” Mahoney said. “Any of those ways that you participate in the race gets you into the after-party for free.”

Those who want to say they’ve been there, done that, got the T-shirt and party afterward have a new option. The race is introducing the “Spirit Runner” package this year, which includes all of the race goodies — a swag bag, T-shirt, glow item and admission to the after-party — but not a timing chip for the 5K. The Spirit Runner package costs $20.

Anyone wanting to come solely for the after-party can also do so for a $5 cover charge.

“We were trying to offer another way for somebody that maybe wants to participate and do the fun stuff, but not necessarily do the 5K,” Mahoney said. “Sometimes families like to do these events together but not everybody wants to do the 5K but they all want to participate.”

STAR SPANGLED NIGHT RUN
• Saturday, June 18, 8 p.m.
• A 5K run and race walk
• Registration is $35; $20 for children 12 and under
• Register through raceroster.com or call 601-631-2997
• Race begins at the Southern Cultural Heritage Center on Crawford Street and follows a course through downtown Vicksburg

It runs in the family: Rob Sadler Jr. joins…