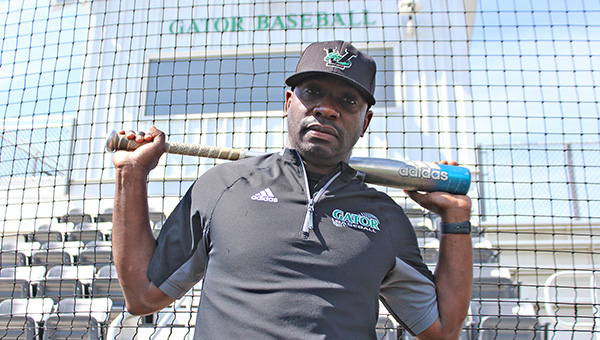 Vicksburg High's Antonio Calvin is the 2022 Vicksburg Post baseball Coach of the Year. Calin led the Gators to an 18-9 record and their first region championship since 2009. (Ernest Bowker/The Vicksburg Post)

Coaching baseball at Vicksburg High School is Antonio Calvin’s job. Coaching life is his real passion, and his mission.

In four short years, Calvin has returned his alma mater’s struggling baseball program to respectability. This season the Gators won their first region championship since 2009, posted a 19-9 record, and Calvin won the 2022 Vicksburg Post Coach of the Year award.

As he assesses those accomplishments, however, it quickly becomes clear that they are mostly a means to an end.

“Baseball is the vehicle for the life lessons. A lot of people don’t understand that,” Calvin said. “A lot of people say Coach Calvin just needs to teach baseball and don’t worry about the rest of it. That’s easy to say until you open up the newspaper and you see 13- and 14-year-old children killing one another. You see people robbing old folk. It’s not just about solitary lessons, whether it’s history or English. This is about life.”

Calvin graduated from Vicksburg High in 2001, during a golden age of baseball in Warren County. A number of his contemporaries went on to play some level of college or professional baseball, and Calvin himself played at Jackson State.

When his playing career was over, he went into coaching and had stops at Callaway and Greenville before returning home in 2018. He said his journey gave him both an appreciation for the difficulty of coaching at Vicksburg, and the knowledge that it was possible to succeed there.

“I’m from this environment. I grew up in a housing project here in Vicksburg. I understand the odds,” he said. “But I guess I’m a product of the odds being beat. Because of that, I feel like it’s my duty to give back and to help other young men beat the odds.”

Vicksburg High had a strong program in the 2000s. It was a perennial playoff team that produced several college stars and reached the MHSAA Class 4A championship series in 2008. By the time Calvin arrived a decade later, however, it had not had a winning season since 2012. Its last playoff victory was in 2014, its last series win in 2008.

Calvin had a vision for rebuilding the program, though, and it started to take shape. After going 7-14 in 2019, the Gators were off to a good start in 2020 when the COVID-19 pandemic cut the season short. A first-round loss to Center Hill in the 2021 Class 5A playoffs capped a 9-12 season and a rebuilding year.

Then, in 2022, everything started to come together.

Vicksburg returned to Showers Field, its longtime practice field that was renovated into a home playing field with the recent school bond issue. It rolled to a 19-9 record and the Region 4-5A championship with a talented group that will only lose a couple of seniors.

Vicksburg’s region oppoents were not the strongest group — the Gators were the only team in the league with a winning overall record — but it still defeated them the way a dominant team is expected to. Vicksburg went 12-0 in region play and outscored those opponents 142-17, with all 12 wins coming via run rule.

“We’re at a place now where we feel fairly confident that no longer will we get beat by teams we are supposed to beat into the ground. Now we’re going to beat them into the ground,” Calvin said. “Now we’re looking forward to the next phase of this journey, and that’s beating teams we’re not supposed to beat, the games people count us out of.”

In keeping with Calvin’s bigger mission, the Gators’ success is also creating life opportunities for his players.

Creating those players, Calvin added, has been a process. Along with assistant coaches Nick Carson, Kenny Johnson, Richard Brown, Ocie Brown and Chandler Dillard, Calvin has sought to nurture a culture of accountability that will generate not just great players but great young men and future leaders.

If it all works, he said, it should build a foundation for long-term success on the field and beyond.

“We have to, at some point in time, have structure and stability in our community again. You have to have discipline. You have to learn morals and values, and lay a solid foundation. If you don’t have that solid foundation you don’t have anything. The minute the wind blows the wrong way is the minute that thing is going to fall down,” Calvin said. “For us here at Vicksburg baseball, we’re really trying to lay that solid foundation so that any and everything we build upon it has no choice but to be a sturdy structure.”